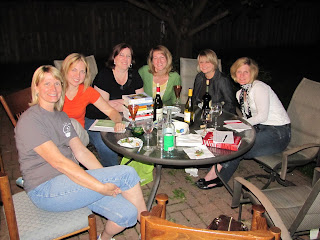 The Omaha Bookworms met last night to discuss Allegra Goodman's The Cookbook Collector. Sadly, the picture is not of last night (although I had every intention of taking a picture and just forgot). That picture is from last summer when Mari ( of Bookworm With A View) was still with us in body as well as in spirit. The plan last night was to be on the patio but the weather just didn't cooperate. At least it was better than the night before when there were 23 tornadoes in Nebraska and the sirens went off here, sending the crowd at the College World Series game scrambling for cover. But I digress...

We were a small group last night--just five of us. Three had finished the book, one was about half way done and one hadn't read it. Ellen, who had recommended it was probably disappointed that the rest of us weren't nearly as enthused. I was happy to learn that neither of the other two who finished the book had foreseen what happened on page 329, which we couldn't discuss because we didn't want to ruin for the person still reading.

We talked a lot about the time period this was set in -- Ellen's of an age where she knew a lot of people who were young enough to really get caught up in the dot.com hype. We talked a little bit about what you would do if you found yourself as suddenly wealthy as many of the characters in this book did. One member has a friend that leaves in a big house they got cheap because the owner had lost all of their money in the dot.com bust.

Even though not all of us loved this one, we would all agree that this makes a good read for book clubs.
Posted by Lisa at 10:36 PM