The number of websites devoted to fairy tales that I've found since starting Fairy Tale Fridays proves that I'm not alone in being fascinated with this particular form of story telling. The number of new books being published further confirms this. But, perhaps, the most telling indication that fairy tales are big right now are the movies based on fairy tales that have been released in the past couple of years with four new movies scheduled for release in 2012.

In June, JACK THE GIANT KILLER is scheduled for release. This take on the classic tale of the boy who climbed the beanstalk turns the tale into an action movie. There is not just one giant who must be confronted but an entire race of them who want to reclaim that land they claim was taken from them. Can't say that I'm looking forward to this one; it will likely appeal much more to young men than any other audience.

SNOW WHITE AND THE HUNTSMAN, also scheduled for release in June, sticks more closely to the original tale for much of the story but it, too, veers off into an action movie. When the huntsman sent to kill Snow White and bring her heart back to the wicked stepmother takes pity on her and spares her, in the movie version he then trains her to fight back against her stepmother with an army that includes eight dwarfs. Again, definitely a movie aimed more toward a younger audience, particularly those who have grown attached to actress Kristin Stewart (she of Twilight fame).

Hansel and Gretel will also come to the silver screen in 2012, this time fifteen years after their encounter with the crone in the candy house. In HANSEL AND GRETEL: WITCH HUNTERS, Hansel and Gretel are now bounty hunters charged with killing witches who may have met their match when they are hired to kill an evil sorceress who's planning on killing all the children in a village. Sadly, this is another one I won't pay to see but I do appreciate that they have, at least, not messed with the original tale here.

THE BROTHERS GRIMM: SNOW WHITE will also be a new take on an old story, but one that I may just have to see. This one promises to include comedy (Nathan Lane is in the cast if that's any clue) and the costumes and settings look spectacular.

On the animated scene, look for BRAVE from Disney-Pixar (which draws from Scottish mythology more than fairy tales) and DOROTHY OF OZ. Although the Wizard of Oz stories aren't centuries-old tales, they are every bit fairy tales in their construction and this version may be just the thing to introduce younger audiences to the stories without being quite a scary as the Judy Garland movie version. 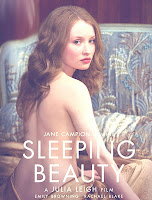 Grown up (and by this I mean very grown up) takes on fairy tales coming out in 2012 include Jane Campion's SLEEPING BEAUTY (only very loosely based on the fairy tale with the sleeping beauty being a prostitute) and PAN, a modern telling of the basic idea of J.M. Barrie's story where Hook is a detective in search of a serial killer who preys on children.

On the whole, I'm thrilled that these old stories continue to capture the imagination of the general public even if it means turning them into action films and I look forward to seeing what new ways fairy tales will be used in the coming year.
Posted by Lisa at 6:00 AM