Broken Harbor by Tana French
Published July 2012 by Penguin Group
Source: my copy courtesy of the publisher in exchange for this review

From 1994-2007, the Ireland enjoyed unprecedented economic growth. The so-called "Celtic Tiger" resulted in a massive building boom. In 2007 the bottom fell out. All over Ireland, enormous housing developments were abandoned, leaving the few families who had already moved in stuck in empty neighborhoods with homes they couldn't give away. 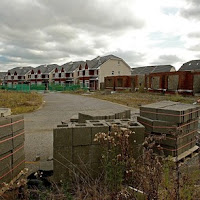 In Brianstown, one of these ghost estates, the Spain family (Patrick, Jennifer and their two young children) has been attacked and left for dead. Mick "Scorcher" Kennedy, the top detective on Dublin's Murder Squad, is called in to solve the case and solve it quickly. Teamed with rookie, Richie Curran, Kennedy moves into action, playing by the rules, putting in the hours, and convinced that the answer lies with the simplest solution.

But there are so many things that just can't be explained by the simplest solution: five baby monitors stationed all over the house and focused on holes in the walls, erased files on the family computer, and a missing weapon in a case that keeps pointing to one of the parents as the perpetrator. Jennifer has miraculously survived but she doesn't have any recollection of the attack and Kennedy is convinced that she is lying to them.   When a suspect is taken in, it appears that Kennedy is right. But things aren't always what they appear to be and Curran and Kennedy soon find themselves with very different opinions on the case. Kennedy's further stressed by the untimely breakdown of his sister, Dina, and his own personal connection to Brianstown. Growing up, Kennedy and his family had vacationed every year at what was then known as Broken Harbor. It was the one place his mother was "right" and happy. It was also the place where she walked into the sea.

"Broken Harbor was nowhere, back then. A dozen scattered houses full of families named Whelan or Lynch who'd been there since evolution began, a shop called Lynch's and a pub called Whelan's, and a handful of caravan spaces, just a fast barefoot run over slipping sand dunes and between tufts of marram grass to the cream-colored sweep of  beach."

Broken Harbor is the fourth book in French's Dublin Murder Squad series, but my first (doesn't everyone start there?). While the stories don't build one upon another, each book ties back to another through a character. In Broken Harbor, Mick Kennedy returns from French's Faithful Place. It's not necessary to have read Faithful Place first, although there are repeated references to a previous case that may have been in that book.

I've been reading raves about French's books for years now so when I was approached to review Broken Harbor, I couldn't pass it up. Thank you, blogger peeps - you were so right about French! Broken Harbor is brooding and atmospheric, building slowly, pulling readers into the Spains' story. The selling point for me, though, was Kennedy. In an unusual move for an author, French focuses character development almost exclusively on Kennedy, giving the reader the rare ability to focus on one character. Not many authors could make this work - French does, never losing track of the rest of her characters and the murders they are all drawn into.

Now the question is, where is my copy of In The Woods, French's first book in the series?