Pin It And Do It - Update

So far, so good on Pinning and Doing in February. Winter is always a big time for movies in our house and I've used my movie board to remind me of several movies to watch. In the past couple of weeks, I've watched: 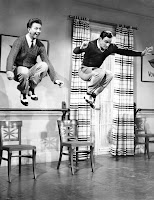 and "The Princess Bride" starring Robin Wright and Cary Elwes

I always feel a little bit like I've cheated when I count movies for Pin It and Do It; I'm not really "doing" anything, after all. But, in my house, getting the t.v. to myself so that I can watch a movie does take some effort so I won't feel too guilty.