This week the ladies at The Broke and The Bookish have asked us to share our top ten best bookish memories. Here goes, in now particular order, my favorite bookish memories:

1. Sitting in the hallway of my parents house with my dad and my siblings while my dad, in his theatrical way of reading, read us great classic books including Mark Twain's Tom Sawyer and Huck Finn. I know it wasn't the only time he ever read to us; they are just the times that stick out foremost in my memories.

2. Hours and hours in the library of Eastridge Elementary School, back when a library was a library and not a media center. My very smart teachers figured out pretty quickly that this girl would work hard to earn extra time there. Some of my favorite finds there were these booklets of plays we were allowed to perform on Friday afternoons. I wish I could remember what those books were called! 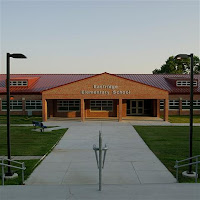 3. It's seems odd to think now, but I still vividly recall getting a lot of the books I got as a child. We didn't have as many books in ye olden days so books were a real treasure. I remember opening Little Women, Little Men, James and the Giant Peach, Heidi, and The Five Little Peppers And How They Grew. Yep, I was raised on books that even then were classics. Now wonder I love them still.

4. Charles H. Gere Branch Library: hours in the summer finding books for the summer reading program; hours in middle school doing research with friends...and flirting with the boys who were there "doing homework," too. Sorry, Mom!

5. Reading with my own children (including out in the hall, sitting on the floor between bedrooms) has spawned a myriad of memories, tiny little gems of moments. One of the standouts was when Mini-me and I were nearing the end of E.B. White's The Trumpet of The Swan and I realized there were tears in his eyes. Not necessarily because the book was so sad (I don't even recall now if it was at that point) but because the book was nearly done. He had fallen that deeply into the book that he couldn't bear to see it end. I was sad for him but also so happy that he was going to grow up loving books that much.

6. When Mini-him was little and there weren't so many grandchildren to adore and they weren't all running off to play with each other, there used to be time for my dad to sit with Mini-him and read. They didn't sit on the floor in the hall any more but snuggled together in a chair or on the sofa. Mini-him, uncharacteristically, rapt as his grandpa turned him on to The Adventures of Huckleberry Finn just as he had me more than 20 years earlier. To this day, it remains one of Mini-him's favorite books.

7. In the fall of 2010, the editors of Omaha.net asked if I'd be interested in attending (downtown) Omaha Lit Fest and writing an article. What? There's a lit fest in Omaha? Heck yes, I was interested. I raved about the lit fest often enough in the past couple of years for you all to know how impressed I was that year by the writers, by the panel topics, and by the efforts of the organizers. You will most especially recall how it sparked an rekindled interest in fairy tales and launched Fairy Tale Fridays. I was so disappointed to have to miss it this year!

8.  I began interacting with author Jennie Nash on her blog after reading her book The Last Beach Bungalow and we struck up a fun correspondence that resulted in her asking me if I would like a copy of her then soon-to-be published book The Threadbare Heart. A few days later, a package arrived at my door. It is no exaggeration to say that I squealed, teared up a little and yes, I may actually have hugged the package for a while before I even opened it. Of course, you all know this story already - I've written about it several times!

9. Some months after that first Omaha Lit Fest, I saw in the paper that author Mary Helen Stefaniak would be speaking at a local indie bookstore. I grabbed my daughter (kicking and screaming) and insisted that we couldn't possibly not support an author coming to town. After all, I'd heard Stefaniak speak at the Lit Fest and was thrilled to get to see her again so soon. Imagine my surprise, then, to have her introduced as being a teacher at Creighton University, right here in Omaha. Seriously. A real, published author from right here in Omaha. Okay, I knew she wasn't the only one but still.

10. A few months after that I worked up the nerve to contact Stefaniak to see if she'd be interested in speaking with the Omaha Bookworms. Not only was she interested, she actually came to the meeting. This lovely woman took time out of her own life to spend the evening charming the book club and joining us in a wonderful discussion of her book The Cailiffs of Baghdad, Georgia as well as joining us in cheering the St. Louis Cardinals on in the World Series. Really, authors are just people, too. Sort of.