Notorious RBG: The Life and Times of Ruth Bader Ginsburg by Irin Carmon and Shana Knizhnik 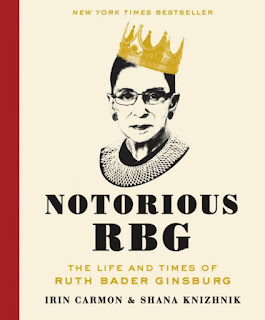 Notorious RBG: The Life and Times of Ruth Bader Ginsburg by Irin Carmon and Shana Knizhnik
Published: October 2015 by HarperCollins Publishers
Source: bought for my Nook

Publisher's Summary:
Supreme Court Justice Ruth Bader Ginsburg never asked for fame—she has only tried to make the world a little better and a little freer.

But nearly a half-century into her career, something funny happened to the octogenarian: she won the internet. Across America, people who weren’t even born when Ginsburg first made her name as a feminist pioneer are tattooing themselves with her face, setting her famously searing dissents to music, and making viral videos in tribute.

Notorious RBG, inspired by the Tumblr that amused the Justice herself and brought to you by its founder and an award-winning feminist journalist, is more than just a love letter. It draws on intimate access to Ginsburg's family members, close friends, colleagues, and clerks, as well an interview with the Justice herself. An original hybrid of reported narrative, annotated dissents, rare archival photos and documents, and illustrations, the book tells a never-before-told story of an unusual and transformative woman who transcends generational divides. As the country struggles with the unfinished business of gender equality and civil rights, Ginsburg stands as a testament to how far we can come with a little chutzpah.

My Thoughts:
I have been wanting to read this book since before it was published, something like two years now. I may actually have developed the entire theme of my bookclub for the year as an excuse to make sure I found time for it (Family, Friendship, and Feminism).

This book grew out of the Tumbr account, NotoriousRBG; it grew out of...oh here, I'll let them tell you:


'This Tumblr began in tribute to Justice Ginsburg’s fierce dissent in a voting rights case, in which she acknowledged the long history, and continuing reality, of racial discrimination in this country. As she has said in another dissent, “The stain of generations of racial oppression is still visible in our society and the determination to hasten its removal remains vital.”" 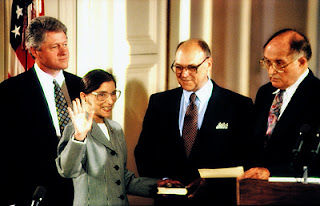 I've been aware of Ruth Bader Ginsburg only about as long as most other people my age, that is to say since she was named as a Supreme Court Justice. Which is also to say that I must have been living with my head under a rock. Much of what makes Bader Ginsburg so beloved now, in addition to her fierce dissents to majority opinions of the Court, is her tiny stature and her, shall we say, advanced age. But those in the know have long known that this woman has been fighting hard for the rights of women (and, she would be quick to point out, for all people) for a very, very long time. Really, most of her life, first as a student fighting to get into law school, then to get every job she's ever had, and then on nearly every job she's ever had. 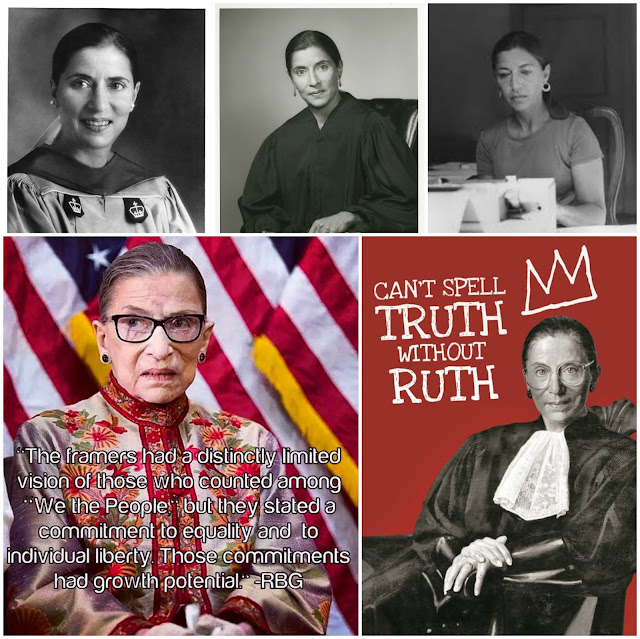 As for the book itself, the opening chapter, "Notorious," threw me a bit. I felt like we were beginning at the ending and I couldn't quite figure out where it went from there. And it did bug me quite a lot that the authors referred to Bader Ginsburg throughout the entire book as "RBG." Only RBG, never by Ruth or Bader Ginsburg or whatever nicknames for her her friends may use.

But the authors have clearly spent a great deal of time with the Justice, herself, as well as with her family members and those who know her best. Readers come away from the book feeling very much as if they know the woman who was known in her youth as Kiki. We learn about the great influences of her life, the great love of her life, the great achievements of her life. We also learn that Bader Ginsburg is a terrible cook, is as passionate about working out daily as she is about opera, and counted Antonin Scalia as a close friend. It's  clear from her body of work that Bader Ginsburg is also passionate equality of all people and incredibly devoted to her work.

Unbiased the book is not. But I think the title alone is fair warning that the authors are fans. RBG's legion of fans are surely more than happy with the book. I already knew RBG was a woman to be admired and a feminist icon. Now I'm certain that the woman is a national treasure.