The Grownup by Gillian Flynn 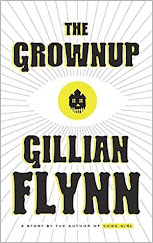 The Grownup by Gillian Flynn

Source: audiobook checked out from my local library

Publisher's Summary:                                                                                        A canny young woman is struggling to survive by perpetrating various levels of mostly harmless fraud. On a rainy April morning, she is reading auras at Spiritual Palms when Susan Burke walks in. A keen observer of human behavior, our unnamed narrator immediately diagnoses beautiful, rich Susan as an unhappy woman eager to give her lovely life a drama injection. However, when the "psychic" visits the eerie Victorian home that has been the source of Susan’s terror and grief, she realizes she may not have to pretend to believe in ghosts anymore. Miles, Susan’s teenage stepson, doesn’t help matters with his disturbing manner and grisly imagination. The three are soon locked in a chilling battle to discover where the evil truly lurks and what, if anything, can be done to escape it. “The Grownup,” which originally appeared as “What Do You Do?” in George R. R. Martin’s Rogues anthology, proves once again that Gillian Flynn is one of the world’s most original and skilled voices in fiction.

My Thoughts:
One thing I've learned about Flynn at this point is that you never know where she's going and she's always going to make you feel uncomfortable. I picked this book up with no idea what it was about so while I was surprised to find out from beginning of the book that "Spiritual Palms" has more than one meaning, I also wasn't. Let's just say you don't want to be picking up your groceries when you're listening to the beginning of this story; the young man who brought out my order might have been a little startled. I must admit that I was also a little started and wondered where this one was going. I certainly didn't see a book that began with a young woman bragging about being the best at giving hand jobs turning into a haunted house story.
Our unnamed narrator has spent her life doing whatever it takes to get by in the world. She's developed inside jokes with her regular male customers to make them feel like she's a friend and learned the tricks to make her female customers believe her readings. She's spent so many years doing whatever it takes to get by that she's confident in her ability to read people and get what she needs from them. So when Susan Burke walks in, our narrator soon becomes certain that she'll be able to "help" Burke in a way that will lead to bigger, more lucrative things, and, maybe, even a chance to be respected.
This being Flynn, you know that things aren't going to work out quite that way. In fact, you know you probably don't have any idea where Flynn is headed. I certainly didn't which is what's alway so marvelous about Flynn's work. This being a short story, it's only about one hour long (64 pages in print) and I was impressed with how complete the story was, with complicated characters, a complete backstory, and plenty of action. Some reviewers weren't thrilled with the ending (endings might be Flynn's one weakness) but it seemed to me to be exactly what the story called for. The perfect little bonbon before I launched into another book that's going to make me feel uncomfortable.
Posted by Lisa at 1:30 AM