When I had the idea to start Fairy Tale Fridays, I largely envisioned myself re-reading beloved fairy tales, reading the new takes on them and discovering the original versions. Perhaps a little research here and there into the origins of the tales. But the more I've read, the more I've wanted to learn about how the stories morphed over time, who passed them down and who's telling them now and I'm always looking for new sources of information. Today I found The Journal of Mythical Arts thanks to Veens at Giving Reading A Chance. I doubly excited to find this site because it covers not just fairy tales but myths as well.

As soon as I started poking around the site, I came across the name Giambattista Basile. You may remember that I only recently discovered Basile (shocking, now that I know how much he contributed to fairy tales) and I decided I wanted to learn more about this man who seems to be one of the first people to record fairy tales which had, until that time, been primarily oral. 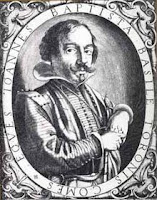 Born in 1575, Basile was both a poet and a military man who held posts in Neapolitan courts. As different as those two roles are, he's best known for two wildly divergent works. One was a series of nine satires of popular culture in Naples, the other a fairy tale collection, the title of which translates to The Tale of Tales or Entertainment for Little Ones. Basile took the tales that he had heard and made them into original tales which are heavily metaphorical and written in the local dialect. The stories were never published until after Basile's death and then fell into relative obscurity until the Brother's Grimm praised the work. For a guy that's been dead nearly 400 years, Basile is remarkably modern--he's got his own Facebook page! So now, in addition to my previous pledge to learn more about religion in fairy tales, I also want to read Basile's original work (well, the English translation, anyway!).
Posted by Lisa at 11:55 PM