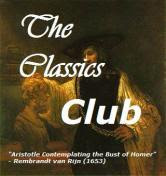 
The Tenant of Wildfell Hall by Anne Bronte
Moll Flanders by Daniel DeFoe
Frankenstein by Mary Wollstonecraft Shelley
Far From The Madding Crowd by Thomas Hardy
North and South by Elizabeth Gaskell
Main Street by Sinclair Lewis
Barchester Towers by Anthony Trollope
My Antonia by Willa Cather
The Woman In White by Wilkie Collins
The Custom of the Country by Edith Wharton
The Children by Edith Wharton
Lady Chatterley's Lover by D. H. Lawrence
The Phantom of the Opera by Gaston Leroux
Sister Carrie by Theodore Dreiser
The Moonstone by Wilkie Collins
Shirley by Charlotte Bronte
Miss Bishop by Bess Streeter Aldrich
Oliver Twist by Charles Dickens

Classics I'd Like To Do As A Readalong:
Little Dorrit by Charles Dickens
The Portrait of a Lady by Henry James
Anna Karenina by Leo Tolstoy
Middlemarch by George Eliot
East of Eden by John Steinbeck

Modern Classics:
Crossing To Safety by Wallace Stegner
The Mystery of Hunting's End by Mignon Eberhart
The Heart Is A Lonely Hunter by Carson McCullers
Brideshead Revisited by Evelyn Waugh
Frenchman's Creek by Daphne du Maurier
My Cousin Rachel by Daphne du Maurier
The Sound And The Fury by William Faulkner
This Side of Paradise by F. Scott Fitzgerald
Doctor Zhivago by Boris Pasternak
The Mysterious Affair At Styles by Agatha Christie
Auntie Mame by Patrick Dennis
Their Eyes Were Watching God by Zora Neale Huston
Wide Sargasso Sea by Jean Rhys
Stoner by John Williams
Things Fall Apart by Chinua Achebe
Native Son by Richard Wright
All The Kings Men by Robert Penn Warren
We Have Always Lived In The Castle by Shirley Jackson
The Remains of the Day by Kazuo Ishiguro
Never Let Me Go by Kazuo Ishiguro

*I realize that this list is, even after extensive research, largely made up of American and European literature. My goal is to continue to look for books from other cultures to add to the list. While this is my list as of today, I reserve the right to add and delete things as the mood strikes. Because, just as I may or may not be in the mood to read any particular book on a given day, the list reflects my mood as of today and books I left off today may be added on another day.