It's not that I'm not enjoying Markus Zusak's The Book Thief (I really am!). It's just that there are so many other things going on around here lately to pull my interest away from reading. Tonight it was some baseball followed by big fireworks show. I've gotten tired of the driveway displays but I sure do love those big booming shows! 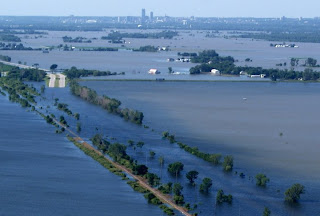 The flooding Missouri River continues to fascinate and horrify me. That road you see on the left? That's Interstate 29, the north-south corridor from Kansas City to Canada. You can just make out Omaha to the south. 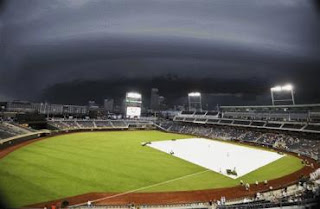 I'm not much of a baseball fan as a general rule, but I do like to watch some college baseball and I love to watch the College World Series. It was especially interesting to watch as a massive bow echo line of thunderstorms moved over the city on Monday night. 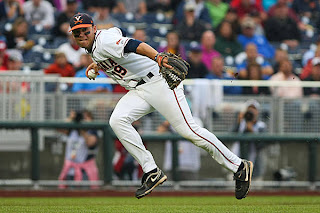 If Virginia had won last night against defending CWS champions, South Carolina, it would have been a toss up what to do tonight. It will be a beautiful night to spend outdoors and, had VA won, it would have meant a rematch to determine who gets to play Florida in the championship series.  Since they lost, the decision is made for us.

This year marks the 25th year for Shakespeare on the Green and it looks like tonight we'll be heading down to watch A Midsummer Night's Dream. They always do a terrific job but a big part of the fun is having a picnic dinner in the park with a few hundred other fans of the bard while enjoying juggling and wandering troubadours. I'm eager to see Hamlet as well so we may be back down to the Green next weekend.

Perhaps I can work in some reading while I'm stretched out on a blanket waiting for it to get dark enough for the show to start. What are your plans for the weekend?
Posted by Lisa at 6:00 AM

Email ThisBlogThis!Share to TwitterShare to FacebookShare to Pinterest
Labels: Omaha