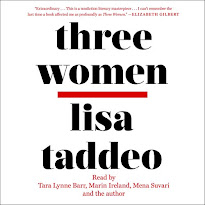 Source: audiobook checked out from my local library

In suburban Indiana we meet Lina, a homemaker and mother of two whose marriage, after a decade, has lost its passion. Starved for affection, Lina battles daily panic attacks and, after reconnecting with an old flame through social media, embarks on an affair that quickly becomes all-consuming. In North Dakota we meet Maggie, a seventeen-year-old high school student who allegedly has a clandestine physical relationship with her handsome, married English teacher; the ensuing criminal trial will turn their quiet community upside down. Finally, in an exclusive enclave of the Northeast, we meet Sloane—a gorgeous, successful, and refined restaurant owner—who is happily married to a man who likes to watch her have sex with other men and women. Based on years of immersive reporting and told with astonishing frankness and immediacy, Three Women is both a feat of journalism and a triumph of storytelling, brimming with nuance and empathy. “A work of deep observation, long conversations, and a kind of journalistic alchemy” (Kate Tuttle, NPR), Three Women introduces us to three unforgettable women—and one remarkable writer—whose experiences remind us that we are not alone.

I've got to stop checking books out just because I remember there was some buzz around them when they came out without having at least some idea what they are about. Once again, I was clueless going into this one and I'm certain it colored my impression of the book. Some of my impression is also due to this being a book I might have enjoyed more if the timing would have been better and I think I would have enjoyed it more in print, although all of the readers were solid.

I think the reviewer from The New Yorker really liked this book (although, to be honest, I wasn't entirely sure which is an odd sensation after reading a review). She kept referring to the relatability of these characters. She alway referenced provincial thinking. Perhaps its the later than makes me question the former. Maggie was the only character I found relatable; not only couldn't I relate the other two women, I couldn't imagine that I know anyone who might have those kinds of relationships. But then, I've long ago learned that we don't know what's going on behind our neighbors' doors. So it's entirely possible there are women on my block who could completely relate.

The book does not read like nonfiction. Taddeo takes us back and forth between the women's stories and I sort of kept waiting for the point at which these stories would come together. Which, of course, they didn't. The detail of the sexual encounters make this a book you probably won't want to listen to in front of other people and it, again, made the stories feel less like nonfiction. I get that Taddeo wanted us to understand something about these encounters by including that level of detail but it sometimes took me away from the point of the women's stories and took away from the feelings the women had about passion, which was the point of Taddeo's work.

If the summary intrigues you, I urge you to read other reviews before you make a decision about reading this one (except you, Mom; you will NOT like this one). Other reviewers rave about this book. For me, it just wasn't the right book right now.