The Lace Reader by Brunonia Barry 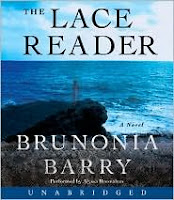 Synopsis:
Can you read your future in a piece of lace? All of the Whitney women can. But the last time Towner read, it killed her sister and nearly robbed Towner of her own sanity. Vowing never to read lace again, her resolve is tested when faced with the mysterious, unsolvable disappearance of her beloved Great Aunt Eva, Salem's original Lace Reader. Told from opposing and often unreliable perspectives, the story engages the reader's own beliefs. Should we listen to Towner, who may be losing her mind for the second time? Or should we believe John Rafferty, a no nonsense New York detective, who ran away from the city to a simpler place only to find himself inextricably involved in a psychic tug of war with all three generations of Whitney women? Does either have the whole story? Or does the truth lie somewhere in the swirling pattern of the lace?

My review:
The story is told from numerous points of view, primarily Towner's (the veracity of which is questionable given her history of mental illness) and it can get confusing. The story also shifts back and forth in time. There is a lot of detail to keep track of--much of it will come back to bear in the end. The last 50 pages are full of surprises, although the whole thing seems a little implausible and a little bit like an action movie with non-stop action. I enjoyed the book, even though in the end I was working hard to figure out if any of it made sense.
Posted by Lisa at 9:59 PM