This week I was flipping through my copy of Grimm's Complete Fairy Tales and chanced to come upon a drawing that reminded me so much of something you would find in a Shel Silverstein book that I had to read the story it went with.  That story is "Mother Hulda," again a new one for me.  This one seems to have its origins in both German and Norse mythology (hmm...maybe I can tie this one in again on Monday!).  In the Norse mythology it's associated with the Norse goddess, Hel, the queen of the underworld. In the Germanic mythology, she was the goddess of marriage but in German folklore Hulda became a name to denote a single goddess, inclusive of all nature.  In some versions, she lives at the bottom of a well.  Which is where we find her in the Grimm Brothers tale.

There was once a widow who had two daughters.  One was her stepdaughter, who was beautiful and a hard worker.  The other was her own daughter who was ugly and lazy.  Just like in the tale of Cinderella, the stepdaughter was made to work hard.  Every day she was made to sit by a well and spin.  One day she pricked her finger and in trying to wash the blood off in the well, she dropped the spindle in the well.  When she told her stepmother, the woman immediately sent her back to fetch the spindle.  So the girl threw herself down the well after the spindle.  Instead of finding herself at the bottom of the well, she found herself in a beautiful meadow.  She began walking and soon heard some bread calling that it needed to be taken from the oven.  So, taking the baker's peel, she took the loaves out.  Further down the road, she came to an apple tree where the apples called out to her that they needed to shaken from the tree.  So the girl shook the tree until all of the apples had fallen. Soon she came to a small home and saw a woman with great teeth.  She was frightened of the woman and made to leave but the woman called out to her.  "Come and live with me," she called. "Do my housework and shake up my bed thoroughly so that the feathers fly and it snows on the world.'  The girl, no longer afraid, stayed and did everything the woman asked. 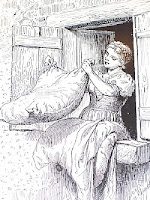 After a long while, the girl becomes homesick (why ever in the world, I cannot imagine), and tells the woman she should must go home.  Mother Hulda has been so pleased with her; when she leaves through a door to return home, Mother Hulda drapes the girl in gold.  When she returns to the widow, the widow sees an opportunity for her own daughter.  She sends the ugly girl to spin by the well.  Immediately the girl pricks her finger, throws the spindle down the well, and jumps in after it.  She, too, finds herself in the meadow but being the lazy girl that she is, she won't take the loaves of bread out of the oven and she won't shake the apple tree.  Mother Hulda, however, offers her the same opportunity she offered the stepsister and the girl agrees.  For one day, the girl works hard but soon her laziness begins to show itself.  Mother Hulda says she must be own her way and the girl is happy because she thinks she'll soon be covered with gold.

Mother Hulda has quite a differently plan and as the girl left through the door, she was covered in pitch.  She returned home covered in the stuff and remained that way for the rest of her life.
Posted by Lisa at 8:00 AM