Beatrice and Virgil by Yann Martel

Henry L'Hote's first novel was enormously successful.  But when he pitches a unique idea to his publisher, a flip book that combines a novel and essay about the Holocaust, he is so thoroughly shot down that he gives up on writing entirely.  He and his wife settle into a comfortable life in which Henry has found himself a pleasing job in a chocolate shop and has involved himself in a local theater.  But still the occasion letter from a fan reaches him and one day a letter arrives that so piques Henry's interest that he tracks down the address it came from.  This leads him to a taxidermist, also named Henry, who is asking for Henry's help with a play he is writing about a donkey named Beatrice and a howler monkey named Virgil. As Henry learns more and more about the play, he becomes convinced that the play is about victims of the Holocaust and finds himself sucked into the vortex that is Henry, the taxidermist.

When this book first came out, emotions really ran high.  In the book blogosphere, where Martel's Life of Pi is so beloved, expectations were high.  Reviewers really wanted to love this book.  But almost none of them did; in fact, the ending of this book even made some of them very angry.  So, of course, I had to read it.

Not having yet read Life of Pi, I had no great expectations for this book going in; I was just looking for a book that would make me think.  On that score, Beatrice and Virgil succeeds. Henry (a not-so-thinly veiled Martel) goes on at length about the capacity of fiction to be even more real than nonfiction and, in his defense of fiction, poses the idea that "if history doesn't become story, it dies to everyone except the historian." Martel also takes the opportunity here to explore the reasons that some books just don't get made.  In Henry's case, it's largely due to the fact that no one knows how to market the book.

Once Henry makes contact with the taxidermist, the book takes on an entirely different tone and much of the rest of the book is the taxidermist's play.  The play is not particularly interesting in the beginning and once it starts to pick up, Martel spends a lot of time explaining to the reader how cleverly he is telling the story of the Holocaust in fiction.  And yet the reader does begin to become attached to Beatrice and Virgil, just as Henry does.  And then, sure enough, the big twist.  It didn't so much make me angry as it made me think that Martel had gotten to a point where he just couldn't figure out any other way to go on, any other way to wrap things up. 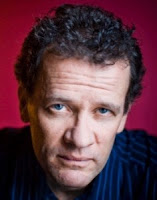 Martel does write beautifully (although Publishers Weekly called the prose "amateurish").  So I'm taking that piece from this book and looking forward to finding the time to read Life of Pi with the hope of liking it so much more.

Thanks to TLC Book Tours for including me on this tour. I find, in reading the reviews of the other hosts, that I'm not alone in my opinions about this book.  Was it interesting? Yes. Was it also flawed? Again, yes.

Posted by Lisa at 6:00 AM
Email ThisBlogThis!Share to TwitterShare to FacebookShare to Pinterest
Labels: book review, fiction, TLC Book Tours