The Crying Tree by Naseem Rakha 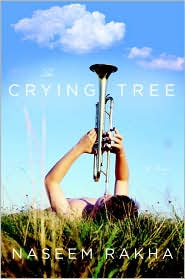 Nate Stanley has uprooted his family from the only home they have ever known in Illinois and moved them to central Oregon.  A terrific job opportunity, he tells his wife, Irene, and that it will be good for their son, Shep.  A year and a half later, Shep is shot to death in their home, held in his father's arms as he takes his last breath.  The nineteen-year-old who pulled the trigger is arrested, tried and sentenced to death.

"At the grave she reached for her daughter, but the girl broke free and took off for the tree.  It was a scraggly-looking thing, with a thick trunk and wizened branches holding fanlike tassels of green.  A few minutes later, Bliss was back with a small handful of yellow, sap-filled pearls. "They look like tears," she said, showing them to her aunt Carol and then her mother.  "Like the tree's crying." Irene ran her hand down her child's arm, then looked away.  There are certain things you should never have to see in life.  A crying tree standing beside your son's grave was one."

Nate, Irene and their daughter, Bliss, all deal with Shep's death in their own way.  Irene is so filled with hate that she becomes all but incapable of dealing with life.


"Each day since they moved back in, Irene had hauled herself from her living room chair and gone into this room, allowing herself to touch one thing: a book, a blanket, a rock, a piece of paper, the horn.  Then, with that item in hand, she would close her eyes and conjure her boy, calling him, talking, praying, crying. "

Until one day her daughter's boyfriend suggests that he and Bliss will marry as soon as she gets out of high school.  Not wanting Bliss to follow in her own footsteps, Irene pulls herself up enough to make sure that Bliss, instead of getting married, goes to college and begins to live her own life.  But still Irene is living with so much despair that on the day Shep would have turned 25, Irene takes an overdose of pills.  It's only then that she realizes that she doesn't want to die and that she can no longer spend her life wishing for Daniel Robbin's death.  She makes the radical decision to write to him and tell him that she forgives him.  To her surprise, Robbins writes back and the two begin a correspondence that lasts for the next nine years until the day that Irene receives notice that Robbin's execution date has been set.  Irene knows then that she must see Robbins and that doing that will mean that she will finally have to tell Nate and Bliss what she has been doing for all of these years.

This book started off slowly for me, which was surprising considering how soon into the book Shep's death occurs.  I fully expected to be devastated by the emotions the family was going through.  But Rakha pulled me in as I watched a mother deal with the grief of losing a child in such a horrible way and get dragged down by her inability to focus on anything other than hatred for her son's murderer.  Knowing, going in, that she was going to be able to forgive Robbin, I was compelled to read on to find out how Irene came to that point.  I have always found it inconceivable that a person could forgive someone who did something so heinous to a loved one.  Rakha takes the reader on Irene's journey through all of the emotions and thoughts it takes her to reach that point and I think that she has made me finally understand how that could happen.

The story moves back and forth in time and between various points of view.  Occasionally the changes in time were confusing as I had to try to recall what had happened when last we were in a particular time period, but it did help explain what was going on now by looking back. One of the points of view Rahka uses is that of the superintendent of the prison in which Robbins is confined.  It helps to take the reader into that part of the story but, in order to make him an appealing character and to explain later actions, we get a look into his history that I wasn't entirely sure was necessary.

As the story progressed, I couldn't imagine where Rahka was taking me or how the story would pan out.  Along the way, she throws in some surprises, some tension, and ultimately, some grace and peace.

This would make a terrific book club selection.  There is so much to discuss.  You just know that you're in for an interesting read when it's recommended by Sister Helen Prejean, author of "Dead Man Walking."
Posted by Lisa at 12:24 AM
Email ThisBlogThis!Share to TwitterShare to FacebookShare to Pinterest
Labels: book review, grief, literary fiction