The Things They Carried by Tim O'Brien - My Thoughts 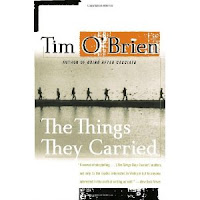 The Things They Carried by Tim O'Brien

Knowing that I was not going to have time to read the book for a while, and knowing that it was something that would appeal to my dad, I loaned him the book.  He wrote a wonderful review for Lit And Life and I'm by no means going to try to top that one.  But after discussing my thoughts on the book with a Kim of Sophisticated Dorkiness, I wanted to share them here as well.

My dad talked about the opening chapter in which O'Brien details the things the soldiers carried.  This chapter really drew me into the book as well.


"To carry something was to hump it, as when lieutenant Jimmy Cross humped his love for Martha up the hills and through the swamps.  In its intransitive form, to hump meant to walk, or to march, but it implied burdens far beyond the intransitive."

It was these burdens that made the listing of the actual physical burdens so much more than a mere listing.


"They carried all the emotional baggage of men who might die.  Grief, terror, love, longing - these were intangibles, but the intangibles had their own mass and specific gravity, they had tangible weight."

"They carried all they could bear, and then some, including a silent awe for the terrible power of the things they carried."

The stories that have really stayed with me were:

"On The Rainy River": a story about the narrator's decision not to run to Canada to avoid the war and how this made him feel like a coward more than evading the war would have.

"How To Tell A True War Story": here O'Brien really begins to delve into what is the truth about the stories of war.


"A true war story is never moral.  It does not instruct, nor encourage virtue, not suggest models of proper human behavior, nor restrain men from doing the things men have always done.  If a story seems moral, do not believe it.  If at the end of a war story you feel uplifted, or if you feel that some small bit of rectitude has been salvaged from the larger waste, then you have been made the victim of a very old and terrible lie."


"Sweetheart of Song Tra Bong": in this story one of the soldiers sneaks his girlfriend into camp.  What becomes of her is not in the least what you might expect but it is equally horrifying, especially if you have always believed that wars would never happen if women were in charge.

"The Man I Killed": the narrator kills his first enemy soldier and then is paralyzed imagining who he might have been and who he might have become.  This incident will come back again in other stories and make the reader wonder exactly what really happened.

The Things They Carried is a work of fiction.  One that does not read or feel like a work of fiction.  Having been written by someone who was there, the reader cannot help but feel that much of what O'Brien writes is based on someone's reality of the life of a soldier and the aftermath of war on soldiers.  There is no other way to end this post other than to say to you "read this book."  It is beautifully written and eloquent in a way that few books about war are.

Thanks to Jennie Nash, who first made me aware of this book.  It is one that will remain on my shelves, one that will be read again.
Posted by Lisa at 6:00 AM
Email ThisBlogThis!Share to TwitterShare to FacebookShare to Pinterest
Labels: book review, Vietnam war