The Comfort of Lies by Randy Susan Meyers

The Comfort of Lies by Randy Susan Meyers
Published February 2013 by Atria Books
Source: my copy courtesy of the publisher and TLC Book Tours in exchange for this review

Publisher's Summary:
A little girl’s birthday triggers a collision course for three women—the woman who gave birth to her, the woman whose husband fathered her, and the woman who adopted her—forcing them to face the damages of infidelity and make decisions about marriage, motherhood, and their careers. The Comfort of Lies, a novel about the collateral damage of infidelity, reveals the darkest and most private thoughts of three women.

Five years ago, Tia fell into obsessive love with a man she could never have. Married, and the father of two boys, Nathan was unavailable in every way. When she became pregnant, he disappeared, and she gave up her baby for adoption. Now, she’s trying to connect with her lost daughter and former lover.

Five years ago, Caroline, a dedicated pathologist, reluctantly adopted a baby to please her husband. She prayed her misgivings would disappear; instead, she’s questioning whether she’s cut out for the role of wife and mother.

Five years ago, Juliette considered her life ideal: she had a loving family, a solid marriage, and a thriving business. Then she discovered Nathan’s affair. He’d promised he’d never stray again and she trusted him. But that was before she knew about the baby. Now, when Juliette intercepts a letter containing photos meant for Nathan, her world crumbles again. How could Nathan deny his daughter? And if he’s kept this a secret from her, what else is he hiding? Desperate for the truth, Juliette goes in search of the little girl. Her quest leads to Caroline and Tia and before long, the women are on a collision course with consequences that none of them could have predicted.

My Thoughts:
A couple of years ago, I read Meyers' The Murderer's Daughters, and very much enjoyed it. I looked forward to reading more of Meyers' writing, learning more of what she might teach me about the relationship between women in difficult situations.

This novel is about much more than just the lie of an affair. Everyone of these women is living with lies in one way or another. Tia has lied to herself for years about the truth of her relationship with Nathan, Caroline has been lying to her husband about how she feels about being a mother, and Juliette's lies set in motion the collision course that will bring all three of the women together.

Unfortunately, I just couldn't buy into these characters. They were meant to feel real but, for me, they simply felt like stereotypes and I largely found them to be annoying. The backgrounds of the ladies, intended to explain them more fully, felt forced. I never connected with any of the characters and without that connection, it was hard for me to care what happened to them, one way or another. I truly felt sorry that poor Savannah (the child at the heart of all of this) had any of these people involved in her life. 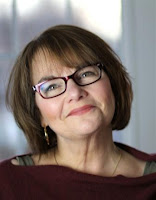 It's an interesting concept for a story (certainly this type of thing happens) and there are bound to be readers who will find the story interesting enough to enjoy the book. For other opinions about the book, check out the full TLC tour.  To learn more about Meyers, her background and her writing, visit her website. You can also follow her on Twitter and at The Huffington Post.

Thanks to TLC Book Tours for including me in this tour. While this book didn't work for me as a novel, it did give me plenty to think about and would make a good choice for book clubs with its themes of love, fidelity, honesty, and the question of what really makes someone a parent.