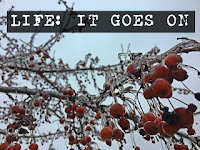 Huzzah! I think we are going to survive winter! The moisture falling out of the sky the past couple of days has been rain (after six more inches of snow on Thursday); and, let me tell you, it's melting like crazy with temps above freezing. Today we are even getting sunshine! My kitty is loving that the sunny spots on the wood floors are actually warm this morning.

Moving on, happy birthday this week to two of my biggest supporters, my dad and my uncle! Thanks to both of them for all of the support they've shown this blog over the years and all of the reviews they've contributed. Love you both!

It's been a busy week around here. Mini-him's car is in for repairs. Instead of paying for a car rental (accident was his fault so his insurance won't cover that), he's been relying, as Blanche Dubois would say, on the kindness of others. I don't mind playing chauffeur too much as it means I get to spend a lot of time with him, which I always enjoy; but, it has taken a bite out of my evenings.

Listened To: I finished Jesmyn Ward's Sing, Unburied, Sing Thursday. If this is a book you haven't read yet, but want to read, I highly recommend the audio version. The readers were exceptional. Friday I started Lisa Halliday's Asymmetry strictly based on the fact that it appeared on a lot of 2018 "Best of" lists. I didn't even read a synopsis before I downloaded it from my library. More than an hour into it, I still don't know where Halliday's going with it.

Watched: Some Westworld, some You, and some college basketball. Other than that, not much.

Read: I finished Jim Harrison's The River Swimmer Friday but have yet to pick up another book.

Made: With all of the running around, I ate out a ridiculous amount this week. I did make some French onion soup the other night. It's so simple to make, I don't know why we don't have it more often. 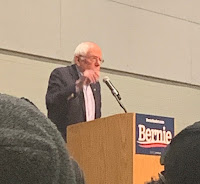 Enjoyed: My first ever campaign launch. Mini-him and I drove across the river to Council Bluffs, Iowa, to watch Bernie Sanders kick off his 2020 campaign. Correct me if I'm wrong, Mom and Dad, but I believe the first time I heard a presidential candidate speak was in 1968 when Robert Kennedy's campaign train stopped in the town. I don't remember a thing he said (I was 7 at the time), but I do have a vivid memory of the crowd and the excitement. In 1976, again before I could vote, I got to hear two presidential candidates speak, including Jimmy Carter who is the only candidate I've ever heard speak who actually won the election. 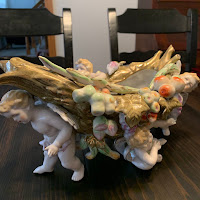 Planning: To continue 40 Bags In 40 Days. Yesterday I worked on my dining room. I didn't get rid of much in there but did get things reorganized. There's one thing I'd love to get rid of but it was my mother-in-law's (it was her sister's and something she wanted when her sister died) and the Big Guy loves it. But, guys, it's seriously not my style. I can't imagine it will ever come out of the buffet!

Thinking About: Heading down to the Omaha Women's Day March. For some reason, at the last minute, the Omaha organizers decided not to do the march in January with everyone else in the world. Just as well, temps that day were in the teens. But I'm feeling super productive today so we shall see if I want to put a halt to accomplishing things around here.

Feeling: Like taking my own spring break from work. I'd love to have a week to work on projects, hit up some thrift and antique stores, read guilt-free, and just putz around. 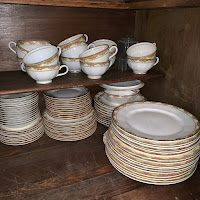 Looking forward to: Seeing my mommy and daddy on Thursday. I've hardly seen them since Christmas, what with all of the snow on the weekends!

Question of the week: I have six sets of dishes, four are china. I'm seriously thinking of getting rid of my everyday dishes and using one of the sets of china for everyday. It sort of seems silly to only use them on a dozen or so times a year. Have any of you done this? If so, how long did it take for you to break enough of the china to decide it was a bad idea?