Happy Tuesday! I returned from spending a week with my dad on Sunday evening and didn't have time to get a post written. It was a tough week for both of us, as we worked at helping him find his way; but I'm grateful to have gotten to spend the time with him. He told me some stories about my mom that I'd never heard, we took care of some things he's been worrying about and set up some things to help keep him safe, and we marveled again and again at the kindness of so many people. Leaving him yesterday was one of the hardest things I've ever had to do but I am feeling confident that he will be able to stay in his own home.
Last Week I:
Listened To: Rachel Joyce's The Music Shop then I switched to music, including a lot of musicals. 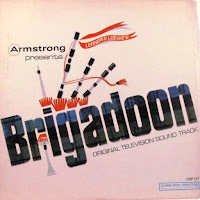 Watched: Some volleyball, some baseball, and some basketball with my dad. Also, I found the 1966 television version of Brigadoon. During bookclub we had been talking about the first albums we had ever bought with our own money; the soundtrack to that show was the first album I ever bought after seeing that television performance and a high school performance - I couldn't have been more than seven years old.
Read: I'm back to reading Alice Hoffman's Magic Lessons, which I never finished when I had the digital ARC.
Made: Not a whole lot. So many people have brought my dad food that cooking was needed. I did make him reubens for St. Patrick's Day and introduced him to risotto another night.
Enjoyed: A lot of time with my daddy. Of course there were tears, but we also found time to talk and even laugh. We accomplished so much!
This Week I’m:
Planning: On knocking out some more bags for 40 Bags In 40 Days. I'm sure it won't surprise you to hear that The Big Guy didn't knock out any bags of his stuff last week while I was gone.
Thinking About: Having to return to working in the office full time. A date's been set. Being back to normal will be good, on the one hand. But I'm so going to miss that extra hour I have on the days I don't go in, being able to start meals while I'm working, and having a cat purring next to me.
Feeling: Excited - my first vaccine is scheduled for this week!
Looking forward to: Seeing my brother and his wife again this weekend. After a year of not seeing them, it has been nice to get to spend a lot of time with them recently.
Question of the week: Have you gotten your vaccine yet? If so, how did it go for you?
Posted by Lisa at 1:30 AM
Email ThisBlogThis!Share to TwitterShare to FacebookShare to Pinterest
Labels: Life: It Goes On