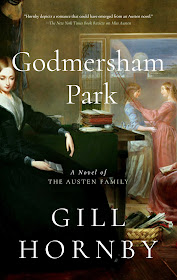 Godmersham Park by Gill Hornby
416 Pages
Published November 2022 by Pegasus Books
Source: my copy courtesy of the publisher, through Austenprose PR
Publisher's Summary:
On January 21, 1804, Anne Sharpe arrives at Godmersham Park in Kent to take up the position of governess. At thirty-one years old, she has no previous experience of either teaching or fine country houses. Her mother has died, and she has nowhere else to go. Anne is left with no choice. For her new charge—twelve-year-old Fanny Austen—Anne's arrival is all novelty and excitement.

The governess role is a uniquely awkward one. Anne is neither one of the servants, nor one of the family, and to balance a position between the "upstairs" and "downstairs" members of the household is a diplomatic chess game. One wrong move may result in instant dismissal. Anne knows that she must never let down her guard.

When Mr. Edward Austen's family comes to stay, Anne forms an immediate attachment to Jane. They write plays together, and enjoy long discussions. However, in the process, Anne reveals herself as not merely pretty, charming, and competent; she is clever too. Even her sleepy, complacent, mistress can hardly fail to notice.

Meanwhile Jane's brother, Henry, begins to take an unusually strong interest in the lovely young governess. And from now on, Anne's days at Godmersham Park are numbered.

My Thoughts:
As those of you who have been around a while know, I'm not a huge fan of books that play off of the classics, especially my beloved Jane Austen. But because this one picks up a tangential thread from Jane's life, rather than her books, I decided to give it a chance.
Godmersham Park is based on the real experiences of Anne Sharpe during her time at Godmersham Park, home of Edward Austen, Jane's brother. During her time there, her young charge, Fanny, kept a diary detailing the small details of life in the home; there were, as well, letters between Fanny and Jane, Hornby had a wealth of information to build her story from. Little is known of Anne's life before her arrival at Godmersham Park, leaving it entirely to Hornby's imagination as to how a woman of Anne's education and polish ended up working as a governess.
I was drawn into this book immediately because of Hornby's writing style, which so closely resembles writers of the period in which the story is set. Hornby brings to the book some of the wit I so enjoy in Austen's books, as well as the details of life at that time that plop me right down into the story (the clothing, food, setting, and politics of life in a monied home). As much as I enjoyed reading Anne's story, I was equally taken with the chance to "get to know" Jane better - her struggles with life as a single woman without money, her first forays into writing, her relationships with her family.
My one quibble with the book (don't you just hate that I always use that word to describe the things I have issues with in a book - I wish I could come up with another word that described my feelings as well) is that it sometimes went on a bit too long for me when Anne returned to visit her former nurse. But those visits resulted in a payoff that made perfect sense for how Anne came to find herself unsupported by her father, after having turned down marriage proposals.
I don't think I'm giving anything away when I tell you that Anne's tenure at Godmersham Park was short lived; certainly readers will see that coming - Mrs. Edward Austen was bound to find fault in some way. But good golly did I want Anne to find a place to call home, to be able to stay with her dear Fanny and educate the other Austen children, to continue to be able to spend time with Jane.
Thank you so much to Laurel, of Austenprose PR, for inviting me to join the tour for this book. And my apologies to her for entirely missing my tour date. As I've thoroughly enjoyed every book I've read and reviewed for Austenprose PR, I do hope she'll forgive me!
Posted by Lisa at 1:30 AM
Email ThisBlogThis!Share to TwitterShare to FacebookShare to Pinterest
Labels: based on reality, book review, book tour, historical fiction, Jane Austen