The Danish Girl by David Ebershoff 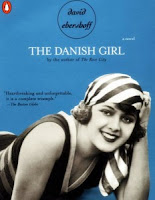 Tall, beautiful, rich Greta Waud, born and raised in California, doesn't really fit in with the "in" crowd and doesn't particularly want to. When her family moves to Denmark for her father to be an ambassador, Greta falls in love--with Denmark and with her art teacher, the petite, pretty, shy Einar Wegener. Rumblings of World War I send the Wauds back to California where Greta meets ceramics artist Teddy Cross. He is entirely the opposite of Einar except in one key point--Greta's mother is not pleased and that makes Teddy all the more appealing. Teddy and Greta marry but life is not easy for them and before the war ends, Teddy has died. Greta returns to Denmark and immediately seeks out Einar.

Soon the two are married and settled into an apartment where both of them have room to paint. Einar is modestly successful; Greta is not. But one day, when the model for the portrait that Greta is working on can't come to Greta asks Einar to put on a pair of women's shoes and stockings to pose. When he does, it awakens something in him. When Greta convinces Einar to also try on a dress, she teasingly calls him "Lili." But several days later, Greta returns to the apartment to find that "Lili" is sitting in her studio. So begins the emergence of the woman that has been living in Einar all of his life. Greta, who may stand up to anyone else, devoted to doing what makes her husbands happy so, despite misgivings, she allows Lili to become more and more a part of their lives, going so far as to convince everyone else that Lili is Einar's cousin and taking her for outings. Soon Lili is appearing more and more frequently, taking over the body entirely. Greta is terribly conflicted--on the one hand, she appears to be losing her husband; on the other hand, Lili has become an inspiration for Greta's painting and Greta is now becoming very successful. The fight is taking it's toll on the body with frequent bouts of unexplained bleeding, loss of appetite and an inability to get enough sleep. Mentally, Einar/Lili have become so separate that one can often not recall what the other has done.

Greta, with encouragement from her brother, Carlisle, in whom she has confided, begins to look for ways to help make Lili whole. Carlisle tries to find psychiatrics who can help but Greta finds a doctor who says he can physically make Lili the woman that she is mentally. Now Greta has to find a way to live with Lili/Einar's decision.

You may have already heard the premise of this book and think that it is a book about gender and sexual identity. It is but it is much more a love story, a book that examines how much one person is willing to give to make another person happy. It's a book about finding our true identities--here the main focus is Einar but the book looks beyond Einar at Greta as well. Ebershoff does a wonderful job of making this a story about people and their motivations and feelings rather than a sensationalist story. I found Greta, in particular, fascinating. As we learn more about her history with Teddy, we learn what may be the reason she is so willing to do whatever it is that will make Einar happy but Greta is also encouraging Lili to come to the fore for her own selfish reasons. And for a woman who is forward thinking enough to encourage her spouse to act out on his desire to become a woman, Greta is terribly old-fashioned in that she remains faithful to Einar despite the fact that they are clearly not a married couple any longer in the usual sense.

"Part of Greta wanted to be married to the most scandalous man in the world. It had always annoyed her when people assumed that just because she had married she was now seeking a conventional life."

"Although she didn't like to admit it, she was like many young women from Pasadena who thought of divorce as a sign of moral faccidness...She found herself unusually concerned about what others might think and say about her--as if she were so week-minded that she had simply married the wrong man."

Ebershoff has a terrific way of making the setting a true part of the story--using just enough words to convey the scene without making the reader's eyes glaze over.

"Inside the Radhuset there was a covered courtyard decorated in the style of the Italian Renaissance. On three sides were open galleries supported by pillars. Above, a canopy of crossing timberbeams. On the stage was an orchestra, and there was a long table with trays of oysters. Hundreds of people were dancing, hands of handsome men on the slender waists of women whose eyelids were painted blue. Two girls on a bench were writing a note to someone, giggling over it. There was a circle of men in tuxedos with their hands in their pockets, their eyes roaming."

Although the book is divided into four place/time periods, it does go back and forth in time within those parts and it was, on occasion, hard to get back into the main story after a flashback. Some of the time spent exploring the past began to feel repetitive to me, as did the descriptions of the paintings of bogs that Einar was known for. But Ebershoff handled what could have been a sordid story without making it sordid. There is some talk of sex and, of course, bodily parts but only what felt like was necessary.

This is not a book for everyone and I'm not sure that I would have picked it up on my own. But I did enjoy it very much and think there would be a lot here for book clubs to talk about--provided the members of your book club are openminded. Thanks to Lisa and TLC Book Tours for including me on this tour!