I had such high hopes this week for getting a lot of reading done. After all, it's usually cold (and often snowy or icy) this time of year and my natural instinct is to burrow in to a corner of the sofa with a warm blanket and a good book. A week or so ago, it seemed like this was the perfect week to participate in a read-a-thon.

Then life, once again, intervened. Mini-me got an apartment was was able to move in this week which meant mom, of course, had to drop everything and help pack and move. Tuesday night the Omaha Bookworms met to discuss Nicole Krauss' The History of Love. Wednesday evening Mini-him came into town and announced to his astonished parents, as we cleaned up dinner, that we needed to clean ourselves up because we were headed downtown to see Craig Ferguson (of the Late, Late Show on CBS). Finally, it was The Big Guy's birthday yesterday which meant we had to celebrate that all weekend. So it was a fun week but not a good week to get a lot of reading done. 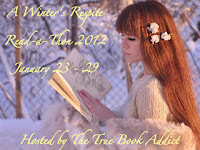 Still, I will have finished two books by the end of A Winter's Respite today and gotten a start on a third so I'm feeling good about the read-a-thon. Better yet, I'm feeling like I've gotten my reading mojo back, something I've been missing terribly in the past few months.

The History of Love, by the way, was a spectacular bust with the Omaha Bookworms. Three people didn't bother to finish it even and those that did had a hard time with the story line and no connection to the characters. I think I was the only one that found anything to like about it at all.

I've got reviews of The End of the Affair and Left Neglected coming up this week and I will, finally, return to Fairy Tale Fridays. This week, Hans Christian Andersen will be making an appearance. For some reason, one of the songs from Disney's Little Mermaid popped into my head which meant, of course, that I had to read the original story and at least one story inspired by it.

It also meant that I'll be starting Carolyn Turgeon's Mermaid today and will also pick a new nonfiction book, although I haven't decided on that one yet. What are you reading this week?
Posted by Lisa at 10:23 AM