The Western Lit Survival Kit: An Irreverent Guide to the Classics from Homer to Faulkner
by Sandra Newman
256 pages
Published January 2012 by Penguin Group
Source: the publisher and TLC Book Tours

When this book arrived in the mail, it was immediately grabbed up by The Big Guy, a person who started working on a Master's degree in English Literature before he switched to a more useful degree in business. Now you've got to understand something about The Big Guy and books. He loves them, he really does but he only picks one up to read for short periods at a time and I thought he might never get this one finished in time for me to read it. And he didn't. So while he sits here next to me watching football, I'm going to have him dictate his review of this one.

In The Western Lit Survival Kit, Newman does what so many others have been unable to do, she makes reading the "books you really should read" sound like they just might be readable and possibly even fun. Newman takes the reader from Ancient Greece straight through to what she calls The Messy Twentieth. In the process, Newman educates the reader as to the most notable books and authors of each period, never forgetting to keep the reader entertained.


"Most of what you need to know about Greek lyric poets is Sappho...In a time when women were still acceptable birthday presents, Sappho's status was unprecedented."

Newman also gives a brief introduction to each time period and often compares that period to current times to make the reader better understand the atmosphere in which the authors were working. Perhaps the greatest asset of the book, for the reader trying to decide whether or not to tackle a particular work, are the graphs that Newman includes for each book that she references. Each book is graded on a scale of one to ten on three counts: importance, difficulty and fun. If you are, for example, looking to tackle something that's truly considered an important work and which you are willing to read regardless of difficulty or the fun it might offer, you might try John Milton's Paradise Lost. But if you'd like to pick up something that is both important and fun, then you could look to Shakespeare's Othello. Want something that's both important and fun but not as difficult as Othello? You might pick up Emily Dickinson's poems or Mark Twain's Adventures of Huckleberry Finn. And when you look up that last book, you can also find that Newman compared Twain to Jon Stewart and that Ernest Hemingway was often cited as saying that "all modern American literature comes from Huckleberry Finn."

The Big Guy says that Newman is very bright, very witty and very educated. The reader should have at least a moderate level of literary education to catch all of Newman's witticisms. The information is presented in an entertaining way that gives the reader the key points that he/she needs to know about the book as well as giving an insider's perspective. Unlike so many books these days, The Big Guy says this is one book that is "as advertised." Neither of us keeps many books but he says that this one is a keeper as an excellent reference as each of us tries to work our way through the "books we really must read" and to help us decide which ones we really do want to tackle.

Thanks to TLC Book Tours for allowing us to be on the tour for this exceptional book. and thanks to The Big Guy for sharing his thoughts! 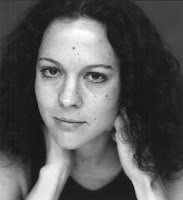 For more opinions on this book, please check out the full tour. Sandra Newman is the author of several novels, a memoir and two other non-fiction works.
Posted by Lisa at 6:00 AM
Email ThisBlogThis!Share to TwitterShare to FacebookShare to Pinterest
Labels: book review, nonfiction, TLC Book Tours