The Interestings by Meg Wolitzer 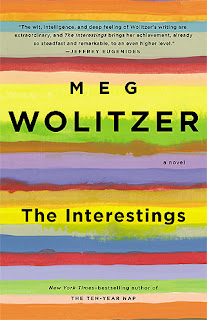 The Interestings by Meg Wolitzer
Published April 2013 by Penguin Publishing Group
Source: I bought both an audio and hardcover edition, as one does

Publisher's Summary:
The summer that Nixon resigns, six teenagers at a summer camp for the arts become inseparable. Decades later the bond remains powerful, but so much else has changed. In The Interestings, Wolitzer follows these characters from the height of youth through middle age, as their talents, fortunes, and degrees of satisfaction diverge.

The kind of creativity that is rewarded at age fifteen is not always enough to propel someone through life at age thirty; not everyone can sustain, in adulthood, what seemed so special in adolescence. Jules Jacobson, an aspiring comic actress, eventually resigns herself to a more practical occupation and lifestyle. Her friend Jonah, a gifted musician, stops playing the guitar and becomes an engineer. But Ethan and Ash, Jules’s now-married best friends, become shockingly successful—true to their initial artistic dreams, with the wealth and access that allow those dreams to keep expanding. The friendships endure and even prosper, but also underscore the differences in their fates, in what their talents have become and the shapes their lives have taken.

My Thoughts:
In 2013, The Interestings showed up a lot of end-of-year best-of lists. You won't see it on my best-of list at the end of this year. Which is not to say that I didn't like a lot about the book, I did. And there's a lot about it the strives to be great. But, for me, it just feel short of that in too many places.

In the beginning of the book, I was all in; I was fourteen when Jules and Ash, Kathy and Goodman, Jonah and Ethan were all fourteen. When Julie (who became Jules as soon as she became one of the group) finds herself suddenly a part of the "cool kids group," I knew exactly how she felt, out of place, afraid to say the wrong thing and be discovered for the interloper she was, thrilled that they found her witty, came to call her the funny one.

But life is hard, bad things happen and our dreams don't always come true. As Jules will learn, like the Rolling Stones sing "you can't always get what you want, but if you try sometime, you just might find, you get what you need." For Jules, getting there is a long journey and, as this is largely a novel that revolves around her, its a decades long journey we're on with her.

Wolitzer has made it clear that she thinks male writers get cut a lot of slack and she wants people to know that women can write great, sprawling novels every bit as well as men can. Maybe that's what she was going for her. The Interestings does span decades. It tackles a lot of tough subjects: rape, homosexuality, drug abuse and alcoholism, mental illness, autism, feminism, life passions, friendship, marriage, AIDS, truth and secrets. So much of it is handled so well.

So why didn't it knock my socks off?

Maybe because, as Jules' husband says at one point, The Interestings weren't as interesting as I thought they were going to be. They just felt a little...flat, with only flashes of deeper emotions. I really wanted to care more about them as adults than I did (although there were definitely times when I became more involved).

Some the problem had to do with the structure of the book. Two of the group largely disappear relatively early on. Another seems to flit along the periphery. Their stories almost seem to interrupt the flow of the other characters' stories, rather than add to them. And maybe there was just too much telling and not enough showing.

Then again, Wolitzer has certainly crafted a book that should make a wonderful book for book club discussions (at least, I'm hoping so, since my book club will be discussing it next week). What happens to people who's dreams don't come true? When do you give up on them? Who do you owe a greater allegiance to - your parents or your spouse?

Is it perfect? Not for me. But it's a book worth reading, if only to make you wish for that group of friends you would be friends with for life. It will make you think and ask questions.