The Happiness Project by Gretchen Rubin 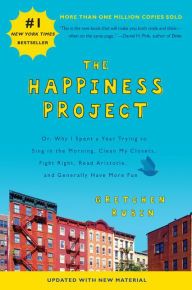 The Happiness Project: Or Why I Spent a Year Trying to Sing in the Morning, Clean My Closets, Fight Right, Read Aristotle, and Generally Have More Fun by Gretchen Rubin
Published December 2009 by HarperCollins Publishers
Source: bought this one

Publisher's Summary:
Gretchen Rubin had an epiphany one rainy afternoon in the unlikeliest of places: a city bus. “The days are long, but the years are short,” she realized. “Time is passing, and I’m not focusing enough on the things that really matter.” In that moment, she decided to dedicate a year to her happiness project.

In this lively and compelling account, Rubin chronicles her adventures during the twelve months she spent test-driving the wisdom of the ages, current scientific research, and lessons from popular culture about how to be happier. Among other things, she found that novelty and challenge are powerful sources of happiness; that money can help buy happiness, when spent wisely; that outer order contributes to inner calm; and that the very smallest of changes can make the biggest difference.

My Thoughts:
Well, who wouldn't want to add more happiness in their life, even those who already feel pretty darn happy?

Apparently me for the first six years after this book was published. In my defense, I'm not much of a "self-help" reader and the idea that you could make yourself happier by reading Aristotle didn't necessarily pull me in. But when I found an inexpensive copy, I picked it up anyway and when I decided to make the word "happier" my word for 2016, I put the book on my nightstand. Where it languished for months as I read a few pages every once in a while until I decided that I had to finish it in 2016.

*Note to anyone who has not already read this book and might be interested: do not drag out the reading of this book for six or nine months. Rubin hits you with a lot of stuff early on that will come up again and again throughout the book and you will not be able to remember it if you take to long to read the book. Trust me on this one.

**Second note to anyone who has not already read this book and might be interested: use a highlighter, dog-ear pages, take notes, use sticky notes...whatever it takes to help you reference back to things as you read and, even more importantly, find them again if you decide, as I have, that you want to give your own happiness project a go.

I'm not necessarily a fan of self-help books. I think the last one I read and felt like I learned usable information from was Men Are From Mars, Women Are From Venus, which was published before the turn of the century (that's not really that long ago, but it sounds like it, doesn't it?). The Happiness Project does not succumb to the pitfalls that so many self-help books do.

Rubin does not purport to have discovered the magic one-size-fits-all solution to living a happy life. As she writes about her own happiness project, Rubin also gives readers the framework on which they might build their own project but she is clear throughout that everyone's project will be unique and needs to be catered to their own interests and goals. In fact, her number one commandment for herself was "Be Gretchen." In other words, while it's a good idea to challenge yourself and learn new things, if you try to be someone you're not, you won't succeed long term.

A lot of research went into The Happiness Project (seriously, who would have thought there would be so many books about happiness?) so while Rubin may not be a so-called "expert" on the subject, she kind of is. But because she is self-deprecating, shares her failures as well as her successes, and admits, in the end, makes her ideas more appealing for me than someone who purports to have all of the answers.

Which is why I'm currently working on setting up my own happiness project. Because, even though "happier" is no longer "my" word, this is a project that ties in perfectly with my word for 2017, "heart."