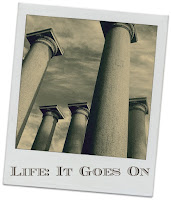 Well, there goes another week without a single post. I would love to say it's because I've been so busy reading that I haven't had time to write reviews or because I've been so busy doing fun things that I just haven't had time to write. Unfortunately, it's neither one of those things. Just life and a book that I just can't make myself read or give up on.

Listening To: I did finish The 19th Wife and will, finally, have a book review to post this week. It's certainly a book that has me thinking. I just finished listening to the book yesterday afternoon then got in the car in the evening and heard a story on As It Happens with the ex-wife of a polygamist in Bountiful, British Columbia. Of course, I was all the more interested in that story having just finished a book about polygamy.

Reading: See above. I will finish The Revolution of Marina M this weekend if only because I have so much time invested in it already. Then I'm on to The Merry Spinster: Tales of Everyday Horror by Mallory Ortberg, a collection of "darkly mischievous stories based on classic fairy tales."

Making: Super nachos, homemade chicken alfredo pizza, pasta, and chocolate/butterscotch chip cookies. Miss H's boyfriend had surgery on Friday so I baked some casseroles for him to pull out of the freezer this week when he gets home from the hospital - a pasta/meatball bake and chicken and stuffing casserole. Because that's what I do, I feed people.

Planning: On finishing our taxes today then it's on to working on 40 Bags In 40 Days. I think I finally have The Big Guy on board to at least go through some things that he's been digging his heels in on. Let's be honest, we don't use at least half of our luggage now that we rarely check baggage so don't really use our bigger bags. Time to let those things go.

Thinking About: New furniture. Or a new rug. We need to make some changes but we can't quite decide what route we want to go (or, at least, we can't agree on what route to go).  Anyone else hate furniture shopping as much as I do?

Enjoying: The Omaha Film Festival and dinner afterward with friends. We saw a documentary called "One Vote."  If you ever feel like your vote is not important or if you don't have time to go vote, this movie will make you change your mind. It might also make you want to do something more to help people, whose voices are not being heard, exercise their right to vote. The movie follows five people on election day in 2016 and, following the movie, all of those people were available for questions. That might not seem like such a big deal until you consider that only two of those people on the stage were from Omaha. Two were from Alaska, three were from Southern states, one was from Chicago. The man standing is Omaha's own Warren Buffet. You'd think he'd be the star of the panel but, honestly, it was that little lady in the red, Dr. Brenda Williams who is tireless and fierce when it comes to making sure that everyone is able to vote.

Feeling: So happy for Miss H who has a boyfriend now who makes her so happy.

Looking forward to: A quiet week?

Question of the week: Spring is coming! What are you most looking forward to in the spring?
Posted by Lisa at 11:52 AM