The 19th Wife by David Ebershoff 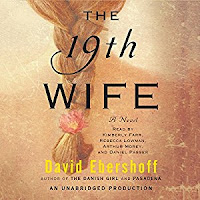 Publisher's Summary:
It is 1875, and Ann Eliza Young has recently separated from her powerful husband, Brigham Young, prophet and leader of the Mormon Church. Expelled and an outcast, Ann Eliza embarks on a crusade to end polygamy in the United States. A rich account of her family’s polygamous history is revealed, including how both she and her mother became plural wives. Yet soon after Ann Eliza’s story begins, a second exquisite narrative unfolds–a tale of murder involving a polygamist family in present-day Utah. Jordan Scott, a young man who was thrown out of his fundamentalist sect years earlier, must reenter the world that cast him aside in order to discover the truth behind his father’s death. And as Ann Eliza’s narrative intertwines with that of Jordan’s search, readers are pulled deeper into the mysteries of love, family, and faith.


My Thoughts:
Ann Eliza Webb Dee Young Denning was a real person, the woman who called herself Brigham Young's 19th wife. I know this because, as I was listening to this book, I found myself more and more curious about how much of what Ebershoff had written was based on fact, particularly in light of the fact that Ebershoff has included many segments that purport to be items from the Mormon church's archives. You know how much love I have for any book that can make me want to do more research!

The 19th Wife was written in the period when it seemed like all novels had two story lines and, just like so many of those, this book suffers from one story line being stronger than the other. Here the historical piece is so fascinating, and Ebershoff spends so much of the book on it, that it often felt like Ebershoff had forgotten he even had another story going.

Ann Eliza Young was an interesting character, a woman who defied one of the most powerful men in the country when she left the Saints, a woman who was thrice divorced in a time when divorce was rare. She was instrumental in the United States outlawing polygamy and toured the country and wrote a book in that pursuit. But she was also a woman who became estranged from both of her sons as adults and whose second edition of her book tried to erase her own flaws.

The Mormon faith is something that I know very little about but haven't thought much of some of their beliefs, to be honest. Ebershoff, however, does a good job of explaining why a group of people would be willing to follow a faith with rules that are so difficult to follow and he highlights the value Mormons place on family and philanthropy. On the other hand, with Ann Eliza Young at the center of the story, the practice of polygamy, and the Saints willingness to accept and encourage it, is only one of the ways Ebershoff looks at the hypocrisy of the faith, particularly that of Brigham Young. I'm going to guess that this book is no more popular among the Latter Day Saints as Ann Eliza Young's original The 19th Wife was.

It's too bad the modern story line wasn't stronger because the modern polygamy is certainly interesting. When the Mormons gave up polygamy, there were some who refused to do it. Having been told for so many decades that polygamy (or plural marriage) was God's will, they felt like the Mormons were turning their backs on their true faith. It's these Mormons who gave us people like Warren Jeffers. Ebershoff calls these people "Firsts" and bases his present day story on them, making many of them descendants of the original characters. His focus is on what becomes of the young men in these sects, young men who the older men are eager to get rid of so they can take the young women for their own wives. It's a story line that deserves at least an equal share of a novel.

Despite the modern story not being as strong, I still enjoyed the book and learned so much. It would make a good book club selection, with a lot to discuss with both the historical and modern pieces.