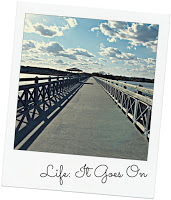 August 18. The kids here are all back in school. Summer is almost over. Oh, maybe not officially. But even for those of us who don't have school-aged children, summer is over when August is over. Honestly, if we didn't mentally start fall on September 1st, we might not even get two months of it - more than once we've had winter storms before then end of October. So while I've absolutely enjoyed beautiful evenings on the patio this week because of evening temperatures in the 70's, I need me some 90 degree days before the end of the month. I need it to feel like summer before summer is gone.

Listened To: I finished Elizabeth Gilbert's City of Girls on Thursday and started J. Ryan Stradal's The Lager Queen of Minnesota Friday. Can I just tell you how perfect the readers are for both of these books? Blair Brown reads City of Girls and Judith Ivey reads Lager Queen and I can't recommend listening to these books enough.

Watched: Football, America's Got Talent, and several episodes of Orange Is The New Black. I'm struggling with Orange, with the violence and threat of violence that is much more constant than previous seasons. I have to be in the right frame of mind to watch it.

Read: I raced through Melanie Benjamin's Mistress of the Ritz and yesterday started Ted Genoway's This Blessed Earth which was a Nebraska Reads choice and is now the Omaha Reads choice.

Made: If it's got tomatoes in it, we've had it this week. This will pretty much be the case for the rest of tomato season!

Enjoyed: Lots of time with friends this week - dinner on Wednesday at a Thai restaurant and last night on the patio having s'mores. 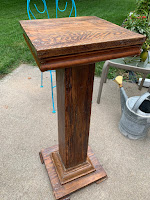 Planning: On finishing up Miss H's room. The new bedding is on, the painting will be done this afternoon, and the curtains are hung. We just need to finish up some organizing and she'll be good to go.

Thinking About: What I'm going to refinish next. I finally finished the plant stand I've been working on for weeks. Early last week I stained it. Then decided I hated the color. So I stripped it back down, sanded it a bit and gave it a new color. It's not perfect (I would have had to sand it down another half inch or so to get to all of the paint!); but, for me, it's imperfectly perfect!

Feeling: Excited - next week we head north for my niece's wedding and I'm already making packing lists. Can't wait to get in the car to celebrate, enjoy time with family, get to see my kids from up north, and spend time along Lake Superior.

Looking forward to: Book club this week and, hopefully, a book club outing to see Where'd You Go Bernadette.

Question of the week: What's your favorite part about a road trip?