The Girl On Legare Street by Karen White 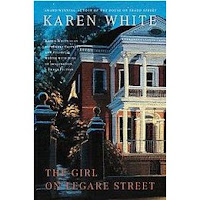 The Girl On Legare Street by Karen White
335 Pages
Published November 2009 by Penguin Group
Source: the publisher and Lisa with TLC Book Tours

After receiving a deadly premonition, Melanie Middleton's mother has returned to Charleston to warn Melanie of the danger. Unfortunately, this is the same daughter she walked out on over 30 years ago and Melanie is not happy to see her mother. But, by pulling some strings, Ginntte is able to get Melanie to work as her realtor as she buys back her family's ancestral home, the very home she fled from all of those years ago. Both women know that this is much more than just moving back home. Because this house is very much haunted. And a very malevolent spirit is in the home and wants to harm them. Ginnette knows it will take both of them to conquer the spirit, along with the help of Melanie's father and her friends. In order to vanquish the spirit, there are a lot of mysteries to be solved. Fortunately there have also been plenty of clues left. Now Melanie, Ginnette and crew just need to solve the clues before it's too late.

This is the second book in a series, the first being The House On Tradd Street which introduced the reader to the majority of the characters in this book. The reader does not have to have read the first book; White fills in all of the details the reader will need to be up to speed. It sometimes felt like too much detail to me, but that may have been because I had no sooner finished The House On Tradd Street before I picked this one up. Jack, the man with whom Melanie has a love/hate relationship, returns in this book as does an old flame of his. And that's where the romance novel aspect of this book comes into play as the three characters try to figure what's what between each of them. Like most of the other reviewers, I also felt like the relationship between Jack and Melanie got annoying at times and I had a problem with Melanie being so trusting of the old flame in some instances, while at other times being to leary of her.

I did like this book better than The House On Tradd Street; for the most part the romance portions took a back burner to the mystery/ghost aspect. I felt like White did a good job with the mystery, laying out the clues and pulling the reader along as the clues unfolded. I kept thinking that if I had been taking notes, I might have been able to solve the mystery myself. This one has some great twists and keeps the reader guessing trying to figure out just who the "bad guys" are. Once again, White gives the reader wonderful history of the Charleston area; clearly it is a subject of which she is very fond.

The ending of this book clearly sets up for a third book in the series.

Posted by Lisa at 1:11 AM
Email ThisBlogThis!Share to TwitterShare to FacebookShare to Pinterest
Labels: book review, mystery/thriller, TLC Book Tours