Isaac English and William Poe and two young men living in a former steel town in rural Pennsylvania that has long since seen its glory days. Isaac, who is brilliant, yearns to get away, from the town and the handicapped father whom he has felt tied down to since his mother's suicide and his older sister's departure for college. Poe practically symbolizes the town itself--once a star football player who could have gone on to college football but chose not to, he is now two years out of high school and unable to maintain a job. He drinks too much and is prone to get into trouble with his temper. In fact, he's had to be bailed out of serious prison time on an assault charge by the local police chief who used to date his mother.

When Isaac steals $4000 from his father and decides to take off for California in hopes of getting into college, he talks Poe into walking at least part of the way with him. When it starts raining, the two seek refuge in an abandoned building but soon run into trouble with a group of homeless men and the result is a confrontation that changes the course of the young mens' lives.

Meyer successfully uses multiple narrative points of view, primarily Isaac and Poe's but also Lee (Isaac's sister), Grace (Poe's mother), Harris (the police chief) and Henry (Isaac's father). Much of the book is written in a stream of consciousness, which didn't always work for me, mostly because I really felt like there was just too much of it and I felt that it was sometimes repetitive. Not that we don't sometimes think about the same things over and over again, but I don't necessarily want to read about it. Isaac, interestingly, does have an alter ego, "the kid," who the reader only gets to know when Meyer puts you into Isaac's head and it's "the kid" who helps Isaac survive when he is on the road.

Meyer does a great job of painting a picture of the beautiful valley the story is primarily set in and of giving the reader a feel for what the town was once like and what it has become.

"You should have been here for the seventies. the department was buying cruisers with Corvette engines maybe every three years. And then came the eighties, and then it wasn't just that we lost all those jobs. It was that people didn't have anything to be good at anymore...There's only so good you can be about pushing a mop or emptying a bedpan. We're trending backwards as a nation, probably for the first time in history, and it's not the kids with the green hair and the bones through their noses. Personally I don't care for it, but those things are inevitable. The real problem is the average citizen does not have a job he can be good at. You lose that, you lose the country."

Ultimately this book just didn't work for me, although by page 50 I could easily see it being made into a movie and I'm sure it is as much a fact that it was just not the right book for me at the right time. I felt, as I so often do, that the book should have been shorter and would not have lost a thing. But it's definitely a promising first effort by Mr. Meyer. 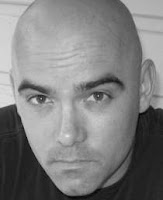 Thanks to Lisa, and TLC Book Tours, for including me in this tour!
Posted by Lisa at 7:31 AM
Email ThisBlogThis!Share to TwitterShare to FacebookShare to Pinterest
Labels: book review, literary fiction, TLC Book Tours