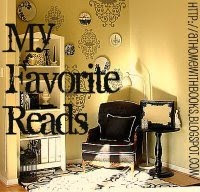 The Birth House by Canadian author Ami McKay was one of the books I noted on Wednesday as one that I think would make a great movie. Michelle, of Red-Headed Book Child, asked if I had reviewed this one. The answer is no--I read this one a few months before I started blogging as part of my face-to-face book club. It was one of my favorite books we have read and lead to one of the liveliest discussions we've ever had (and that's really saying something!).

As a child, Dora Rare, the first female in five generations of Rares, is taken under the wing of Miss Babineau, an outspoken Acadian midwife with a gift for storytelling and a kitchen filled with herbs. As she grows into adulthood, Dora becomes Miss Babineau's apprentice, and together the pair help the women of Scots Bay through infertility, difficult labour, breech births, unwanted pregnancies, and even unfulfilling marriages.
But their idyllic community is threatened with the arrival of Gilbert Thomas, a brash medical doctor armed with promised of sterile, painless childbirth. Soon some of the women begin to question the midwives' methods - an uncertainty that erupts in a war of gossip, accusations, and recriminations after a woman dies. Overshadowed by this powerful, determined male doctor, Dora must summon all her strength and wisdom to protect herself and the birthing rituals of her ancestors, and the village she loves.

We all loved the story (so much going on!) and McKay's writing style. Then we got going on our own birth experiences. One of us had even used a midwife for a home birth. Best laughs of the night were generated when we talked about the treatment Dr. Thomas was using on women who were "hysterical." According to the website for The Birth House:
"At the turn of the century, a woman might be diagnosed with hysteria for the following symptoms - speaking her mind too often, reading too many novels, writing cramps, headaches, fear of impending doom, and being overly 'fretful'. (just to name a few)."

Wanna know what the treatment for hysteria was? Let's just say, we'd all be going to the ob/gyn more than once a year if they still treated women for hysteria!

"Doctors often prescribed vibratory treatments to control the condition. It's no surprise that women were quite pleased when companies such as Sears and the Lindstrom Smith Company began advertising home vibrators in many of the ladies' almanacs and journals of the early 1900's."

To learn more about this book and to see how many treatments you might need check out the web site for The Birth House where you can also learn about McKay's new book due to be released this fall.