On of my favorite books last year was Jamie Ford's "Hotel On The Corner Of Bitter And Sweet" which, in large part dealt with the internment of Japanese Americans during World War II. It was certainly not the first time I had heard of the internment but it definitely opened my eyes as to the way the movement of these people was handled. And it was the first time I recalled reading a book that talked about this part of American history. 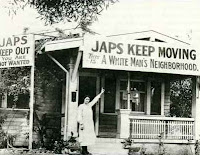 Then, just a few months later, I picked up Jean Davies Okimoto's "The Love Ceiling." The mother of the lead character, Anna, was Japanese and her family had been sent with other Seattle area Japanese Americans to an internment camp in Minidoka, Idaho, the same camp that the characters in "Bitter and Sweet" were sent to. 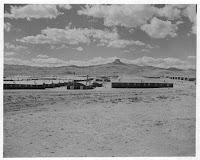 This is that camp. Can you even imagine what it felt like to come from verdant, wet Seattle to this? To say nothing of having to give up nearly everything that you owned, never to get it back? To be honest, given the fact that Russian spies were just found to have been living deep undercover in the U.S., I can somewhat understand why Americans would have been concerned that there might be some spies amongst the Japanese in America. But it is almost beyond comprehension that an entire population, nearly all innocent of any wrongdoing, would be stripped of nearly everything they own, sent hundreds of miles away from their homes and put into camps that were not nearly sufficient to handle the number of people they had to handle nor the climate in which they were located. Shameful.

Thanks to both of these authors for bringing this part of our history into the light.
Posted by Lisa at 11:00 AM
Email ThisBlogThis!Share to TwitterShare to FacebookShare to Pinterest
Labels: All Things In Common