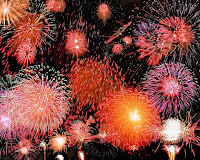 It's going to be a rainy one here but we will soldier on and shoot off fireworks as the weather permits. Sadly, the breakfast we were planning on going to had to be canceled but there will be no stopping Mini-me and his Grandpa from looking for things to blow up with their firecrackers!


In today's encore excerpt, America formally declares its independence from England. The long-standing British occupation had turned into war, and Americans had already fought the British well at Bunker Hill, Dorchester Heights, and Fort Ticonderoga, and in July of 1776, were days away from a demoralising loss at the Battle of Brooklyn. But America had not yet formally declared its independence:

"Congress adopted independence on July 2, 1776. It issued the Declaration on the fourth...It was only after it was on parchment and brought back to Congress on August 2 that they formally signed the document...Congress didn't actually circulate a copy of the document with signatures until January 1777. Why? Well, this was a confession of treason. You were putting your head in the noose. And the war was going very, very poorly in 1776. Only after Trenton and Princeton made it possible (in December) to believe that Americans might win this war did they circulate the document with their signatures."

"In Philadelphia, the same day as the British landing on Staten Island, July 2, 1776, the Continental Congress, in a momentous decision, voted to 'dissolve the connection' with Great Britain. The news reached New York four days later, on July 6th, and at once spontaneous celebrations broke out...On Tuesday, July 9th, at six in the evening, on (Washington's) orders, the several brigades in the city were marched onto the Commons and other parade grounds to hear the Declaration read aloud."

"The formal readings concluded, a great mob of cheering, shouting soldiers and townspeople stormed down Broadway to Bowling Green, where, with ropes and bars, they pulled down the gilded lead statue of George III on his colossal horse. In their fury the crowd hacked off the sovereign's head, severed the nose, clipped the laurels that wreathed his head, and mounted what remained of the head on a spike outside the tavern."

This came to my email from delancyplace.com, a site that my dad steered me to. Sign up for their daily email and you'll get all kinds of excerpts from all kinds of written works. So far I've read about teaching, ugly Japanese stereotypes, ultrarunners, and drug gangs. I highly recommend it as a starting point to look into new things you might not have known about before.
Posted by Lisa at 8:17 AM
Email ThisBlogThis!Share to TwitterShare to FacebookShare to Pinterest
Labels: holiday