First, a confession: I have not finished this book. I completely forgot about my tour date for this one and only just started the book a couple of days ago. That being said, I will, very likely finish it later today because Schwartz has completely sucked me into the story.

A dozen years ago Dwight Arno, killed a young boy in a hit-and-run car accident. After a prison term, his life as a lawyer, husband and father was over and he escaped across the country to California where he became the manager of a sporting goods store, keeping his past hidden from everyone in his new life. As the blurb on the book says he has "started over without exactly moving on." What he has done and the hurt it caused everyone in his life is never far from his mind.

Then one evening Dwight returns home from work to find Sam, his 22-year-old estranged son, sitting in his living room. Sam has fled home after getting in a bar fight in which he hit a guy with a baseball bat. Granted, he was assaulted first. But Sam is horrified to realize just how good it felt to release all of that anger. Wanting to escape, Sam has fled to the last place anyone would think to look for him, the home of the father he hasn't seen in ten years.

As Dwight and Sam come to know each other again and face their own natures, they also impact the women in their lives: ex-wife, lovers, mother.

Told in alternating points of view between many of the characters in the book and in both first- (Dwight) and third-person (all of the other characters), this book moves along rapidly. As it did when I read his The Commoner, Schwartz's beautiful writing is making me want to slow down and savor the book while the story itself is compelling me forward.


"And so it goes; the duffel switching hand to hand, the mind clear but seeing backward, the angled sun anointing him like a troubled pilgrim who's journeyed to the far edge of the continent in search of a blessing that he doesn't believe in but can't stop looking for."


I can't wait to see where Schwartz will ultimately take these characters who have come to life with such great emotional depth. 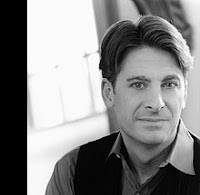 Thanks to TLC Book Tours for including me on this tour!  I'm eager now to read Reservation Road, the book that precedes this one in which readers are introduced to Dwight Arno. Learn more about Schwartz on his website or check out his Facebook page.
Posted by Lisa at 7:20 AM
Email ThisBlogThis!Share to TwitterShare to FacebookShare to Pinterest
Labels: book review, fiction, TLC Book Tours