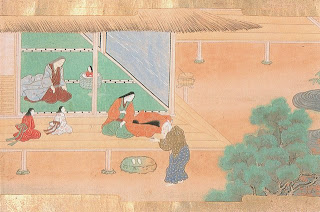 This was meant to be a post about fairy tale princesses but the first thing I saw (well, after I sifted through hundreds of images of Disney princesses, little girls in princess costumes and some naughty princess costume shots) was a lovely Japanese book titled "Japanese Fairy Tales: Princess Splendor." My mind immediately changed tracks. "Princess Splendor" is more widely known as The Tale of the Bamboo Cutter.

There once lived a poor, elderly bamboo cutter and his wife; their great sadness was that they were never able to have children. Every day, the bamboo cutter, Taketori no Okina, went out to cut bamboo which he brought home and fashioned into items that he sold. One day when he was in the bamboo forest, a soft light began glowing from one of the bamboo stalks. When Taketori no Okina looked closely, he discovered, in a notch in the stalk, a very tiny girl, who glowed as if light by the moon. He took the girl home and he and his wife adopted the girl as their own. Everyday after that, when the bamboo cutter went off to work, he found gold and precious gems in the bamboo stalks and he and his family were soon wealthy.

The tiny girl. Kaguya-hime, blossomed into a fully-grown young lady whose beauty soon became known throughout the land. Soon suitors began appearing at the home but the girl had no interest in marrying. Five suitors came to beg for her hand and she set them all off on impossible tasks. None of them succeeded. When the Emperor of Japan, Mikado, heard of Kaguya-hime, he came to see her, fell in love with her and asked her to marry him only to be turned down. Kaguya-hime told the Emperor that she was not of his country so could not go to his palace.

That summer, whenever the moon was full, Kaguya-hime became depressed. When her worried parents questioned Kaguya-hime about her sadness, she finally told them that she was from the Moon and must return to her people there. As the time drew near for Kaguya-hime to leave, the Emperor sent an army to protect her from the Moon people. 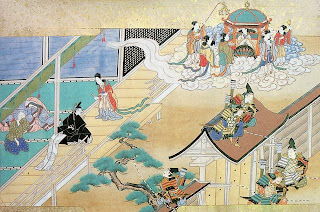 But when the Moon people arrived, the guards were blinded by a strange light. Kaguya-hime announced that she must return to her home, despite her love for her parents and earthly friends. She wrote her parents and the Emperor a sad apology for leaving, gave her parents her own robe as a memento and entrusted the elixir of life to a guard to take to the Emperor. When a feather robe was placed on her shoulder, all of Kaguya-hime's sadness was forgotten and the heavenly group left for the Moon.

When he received the elixir, the Emperor said that he didn't want to live forever without Kaguya-hime.  He sent a guard to the top of the mountain closest to the heavens to burn his message to her, along with the elixir of life, hoping that his message would reach her. Legend tells that the Japanese word for immortality became the name of the mountain...Mount Fuji.

The Tale of the Bamboo Cutter is still widely told today and has been adapted in many forms. It seems hard for me to believe that it wasn't an inspiration for Hans Christian Anderson's Thumbelina. It has been made into a film and an opera and both Sesame Street and Hello Kitty have included the story in special episodes. For manga fans, you may be familiar with the idea of Moon people from the book/television series Sailor Moon.

Once again, in looking into fairy tales, I've come across something new to me that has only piqued my interest in learning more. More Japanese fairy tales to come!
Posted by Lisa at 7:38 PM
Email ThisBlogThis!Share to TwitterShare to FacebookShare to Pinterest
Labels: Fairy Tale Fridays, fairy tales, Japan