Saying Goodbye To A Friend

The act of reading a book is almost always a solitary experience. But, if you're lucky, you'll find a group of people who like to talk about books with. If you're even luckier, who'll find friends in that very same group. A lot of people scoff at book clubs. Some believe they are nothing more than an excuse to drink wine and gossip once a month. Some believe that the people in them take the books much too seriously and don't have any fun at all. I'm sure there are clubs that are like this.

Three years ago a friend invited me to join her book club. I love getting the chance to read books I might not otherwise read; I love having the chance to talk about the books with other people who have read them. Do we drink wine? Oh, yeah, we like our wine! Do we spend a lot of time talking about things other than books? Well, yes, as a matter of fact, we do. Which is how the Omaha Bookworms went from a diverse group of women to a circle of friends. Over the past year or so, we've had to say goodbye to a number of our friends as they have moved away from us. Today, though, five of us joined more than a hundred other people to say a final goodbye to one of our friends. 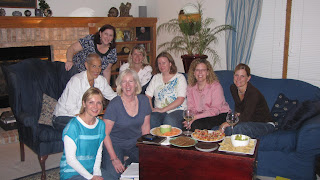 E was diagnosed four years ago with Stage 4 Inflammatory Breast Cancer. At the time she was told that, because she was young and in such great health otherwise, she had six months to two years left. That wasn't good enough for E. She began doing research. Already a healthy eater and advocate of organic foods, E amped it up. She found new methods of treatment, including an alternative to using scans which utilize radiation. E was a fierce competitor in every way so she would have fought Cancer with every ounce of her being no matter what. But E is the mother of three young girls, three girls with whom she was determined to spend more time.

I met E a little more than a year after she was first diagnosed with IBC. Her hair was just growing back from the first rounds of treatment, a beautiful curly steel grey. I didn't know then, though, who E was and what she was going through. Only after that first night did I find out. I couldn't believe it because I have never seen a healthier looking person. This past winter, E was able to join the Omaha Bookworms when we met to discuss her choice of book, Jane Gooddall's Harvest for Hope: A Guide To Mindful Eating and despite what she had been through in the past six months, she remained one of the healthiest looking women I have ever seen.

E was one of the fiercest, most courageous people I have ever met. Her spirit touched so many lives and she was an inspiration to all who knew her. E's favorite quote was "Attitude is Everything" and she had the most amazing attitude. Last year E said of her previous two years:

In the past year, E has been writing a blog. If you are interested in learning more about what E learned about living with and treating Inflammatory Breast Cancer, I encourage you to visit Rolling On The Edge Of Life.
Posted by Lisa at 10:50 PM
Email ThisBlogThis!Share to TwitterShare to FacebookShare to Pinterest
Labels: Omaha Bookworms