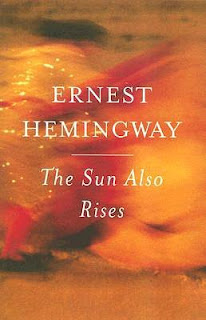 The Sun Also Rises is the story of Jake Barnes, Lady Brett Ashley, Robert Cohn and an assortment of other expatriates as they travel from their wild lives in Paris to the bullfights of Pamploma, Spain in the 1920's. Although the story is primarily about the interaction of these people, it is also an homage to Hemingway's passions.

The overview on the Barnes & Nobel calls The Sun Also Rises poignant, a word that I initially took issue with in reference to this book. My idea of the definition of "poignant" tended to be "profoundly moving, touching." I know this book is considered a masterpiece - any source you look at will tell you as much. But I definitely did not find it profoundly moving nor touching. Poignant, however, can also be defined as "neat, skillful and to the point," "piercing, incisive," and "keenly distressing to the mind." By any of those definitions, The Sun Also Rises is indeed poignant.

"Neat, skillful and to the point"
Hemingway may be the ultimate in "to the point" authors. When writing dialogue, he has almost entirely done away with the "he said, she cried, John extolled" pieces. The reader must pay attention in order to know who is saying what. 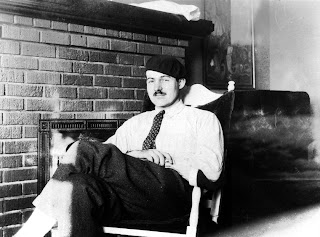 Whereas writers up to the time of the Lost Generation tended to be overly descriptive, Hemingway is very careful about when he uses description. I haven't much of a clue what any of the characters in this book look like, unless other characters have pointed out something about their features. Hemingway clearly preferred to let the reader form an image of his characters based almost entirely on their actions. He seemed to be of a different mind frame when it came to his passions - the streets of Paris, the countryside of Spain, fishing and bullfighting are all vividly portrayed (although certainly not in any way that might be considered flowery).

"Piercing, incisive"
While Hemingway may leave the reader to wonder about his characters appearance, he leaves the reader in no doubt whatsoever about their motivations, their biases, not their feelings, not even at his own expense.

"You're an expatriate. You've lost touch with the soil. You get precious. Fake European standards have ruined you. You drink yourself to death. You become obsessed by sex. You spend all your time talking, not working. You are an expatriate, see? You hang around cafes."

It's been thirty years since I read anything by Hemingway. The Old Man and The Sea really should not be taught to high school students - they don't have the life experience to understand it and it may just scare them off of Hemingway forever! Did I enjoy this one any more? Well, yes and no. Honestly, I found it to be dry and, frankly, boring at times. But there is so much to think about in the book. It made for a excellent book club choice because of the story and the way it changed the way authors write. As much as I love Charles Dickens, Jane Austen and the like, thank you, thank you to Ernest Hemingway and the authors of his generation for teaching writers that sometimes less really is more.
Posted by Lisa at 2:49 PM
Email ThisBlogThis!Share to TwitterShare to FacebookShare to Pinterest
Labels: book review, classic, historical fiction, reading challenges