Whatever You Love by Louis Doughty 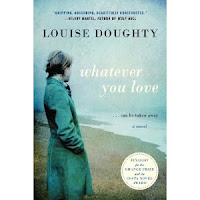 Whatever You Love ... can be taken away: A Novel by Louis Doughty
Published March 2012 by HarperCollins Publishers
Source: my copy was provided by the publisher for participation in a TLC Books Tour

Laura Needham opens her door to find two police officers on her front porch bringing her the worst news that a parent can hear - her nine-year-old daughter has been killed. For Laura, who has been grappling the past couple of years with the disintegration of her marriage, this loss brings on unimaginable grief and anger. As the days following her daughter's death stretch into weeks and then months, Laura spirals further and further out of control. Her rage toward the driver who accidentally killed her daughter drives Laura to discover just how far she will go to revenge the loss of her daughter.


"Most of the time, the knowledge of Betty's absence is a complicated pain, a mixture of anger and confusion and disbelief, but every now and then, there is a moment like this-pain as unalloyed as a sliver of glass, a moment when I cannot believe that I do not die of it as surely as I would die if someone thrust a very thin knife through my chest and out the other side."

There is so much more to the story than just the death of nine-year-old Betty. Laura has grown up without her father (who died when she was an infant), she has spent most of her life nursing her mother (because of Parkinson's disease) and the betrayal of her husband (who has left her for another woman).

Doughty spends much of the book on the relationship between Laura and her ex-husband, David. I was so invested in Laura's grief that, as much as the story of Laura and David fascinated me (it was a relationship that was at once childish and obsessive), I was a little put off by it interrupting the very real pain of Betty's death. Then half way through the book, Doughty hit me with this: right up until the day the police showed up at her door, Laura was able to survive the divorce because she knew that she would always have Betty. When Betty "went away," Laura lost that anchor. And a light bulb went on over my head. That is exactly how I would feel in the same situation. Much has I am almost certain that I would feel the same combination of numbness, pain and rage that Laura felt.

I am just knocked out by the effect that Doughty's writing had on me. When I sat down to write this review, there were so many post-it notes sticking out of my book, I didn't know where to begin.

Whatever You Love is, cliche as it may be, one of those books that I could not put down. Until 300 pages into the book and then I, literally, dropped the book. I could not, still cannot, believe where Doughty went with the story. I said that word that my mom doesn't like me to say - which wasn't entirely my fault because Doughty had just used it as well. We had definitely reached a point in the story that I could not imagine being my reaction to what was happening. When I finally picked the book back up, though, I found myself racing through the last 70 pages, now completely unaware of where Doughty might be heading with the story. And you know what? I liked that just as much I loved the way Whatever You Love had made me feel completely connected to Laura.

Not for the faint of heart, but I would definitely recommend Whatever You Love for book clubs.  For other opinions about the book, check out the full tour at TLC Book Tours. To learn more about Louise Doughty's other books and writings, check out her website.
Posted by Lisa at 12:29 AM
Email ThisBlogThis!Share to TwitterShare to FacebookShare to Pinterest
Labels: book review, literary fiction, TLC Book Tours