Kitchen Daughter by Jael McHenry
Published April 2011 by Simon & Schuster
Source: my copy courtesy of the publisher in exchange for this review

Publisher's Summary:
After the unexpected death of her parents, painfully shy and sheltered 26-year-old Ginny Selvaggio seeks comfort in cooking from family recipes. But the rich, peppery scent of her Nonna’s soup draws an unexpected visitor into the kitchen: the ghost of Nonna herself, dead for twenty years, who appears with a cryptic warning (“do no let her…”) before vanishing like steam from a cooling dish.

A haunted kitchen isn’t Ginny’s only challenge. Her domineering sister, Amanda, (aka “Demanda”) insists on selling their parents’ house, the only home Ginny has ever known. As she packs up her parents’ belongings, Ginny finds evidence of family secrets she isn’t sure how to unravel. She knows how to turn milk into cheese and cream into butter, but she doesn’t know why her mother hid a letter in the bedroom chimney, or the identity of the woman in her father’s photographs. The more she learns, the more she realizes the keys to these riddles lie with the dead, and there’s only one way to get answers: cook from dead people’s recipes, raise their ghosts, and ask them.

My Thoughts:
Okay, you know, if you've read this blog for long, that I'm not much of one for ghosts in books. So you know that I had to give myself a work around AND that McHenry had her work cut out for her if she was going to keep me reading.

McHenry met the challenge through the character of Ginny, a young woman with undiagnosed Asperger's syndrome.

Amanda is not pushing to sell the house because she wants the money: she is pushing to sell the house because she is convinced that Ginny, who has been sheltered all of her life by her mother, won't be able to care for herself. Amanda is dealing with her own grief, has a young family to care for and has every reason to believe that someone who deals with stress by hiding in closets with her hands her parents' shoes might not be able to survive on her own. McHenry arms Ginny with an amazing self-awareness and terrific tenacity. Paired with help from old friends and new (and those ghosts), Ginny discovers she really does have the skills to not only survive but to thrive. 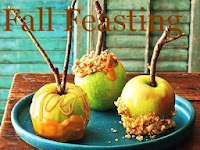 McHenry is guilty of some emotional manipulation and Amanda not as well fleshed out as I would have liked. But McHenry does a fine job of balancing a number of themes, particularly grief. And, oh my goodness, all that talk about food - wonderful descriptions and recipes, people, recipes!

I'm by no means an expert on Asperger's so I can't be certain that McHenry has portrayed the syndrome realistically. It certainly feels realistic and  she has portrayed it with sensitivity and Ginny's growth never feels unnatural or contrived. Instead The Kitchen Daughter will make readers feel just the way that Ginny does - she doesn't need a label and she is every bit as "normal" as you and I.
Posted by Lisa at 10:20 PM
Email ThisBlogThis!Share to TwitterShare to FacebookShare to Pinterest