Mrs. Lincoln's Dressmaker by Jennifer Chiaverini
Published September 2013 by Penguin Group
Source: my copy courtesy of the publisher and TLC Book Tours in exchange for this review

Publisher's Summary:
In a life that spanned nearly a century and witnessed some of the most momentous events in American history, Elizabeth Hobbs Keckley was born a slave. A gifted seamstress, she earned her freedom by the skill of her needle, and won the friendship of First Lady Mary Todd Lincoln by her devotion. A sweeping historical novel, Mrs. Lincoln’s Dressmaker illuminates the extraordinary relationship the two women shared, beginning in the hallowed halls of the White House during the trials of the Civil War and enduring almost, but not quite, to the end of Mrs. Lincoln’s days.


My Thoughts:
I started this book almost two weeks ago, an unheard of length of time for me to take to read a book of only 350 pages. I've been struggling trying to pinpoint just why that was. Perhaps because there is so much fact woven into this novel; I tend to read non-fiction much more slowly, trying to absorb it. In fact, there was even more fact in this novel than I first was aware - Elizabeth Hobbs Keckley was a real person, this really is her story.

The book is well researched and I enjoyed the inside look at life in the White House during the Civil War and the Lincoln family. Mary Todd Lincoln was a complex woman and Chiaverini does an excellent job making her much more than the caricature she so often comes off as. The political backdrop of the story is well done as is Chiaverini's portrayal of life in Washington City for the slaves flooding into the city following the Emancipation Proclamation.

Unfortunately, the story was uneven and were it fell flat for me was in Elizabeth's story. Too much detail about the dresses and sewing weighed the story down all too often. Perhaps the biggest disappointment may not have been Chiaverini's fault - Elizabeth was just so incredibly passive. For a woman who had the strength to earn her freedom, to start a new life in a new city and to build a business up, she seemed to be unable to ever say "no" to Mrs. Lincoln, allowing herself to be pulled from her life and business to attend to Mrs. Lincoln for months on end. Was this fact or fiction? If factual, then Chiaverini may have felt compelled to stick to the facts and even if fiction, she may have felt that the story had to revolve around Mrs. Lincoln's documented actions. Regardless, it made Elizabeth a much less interesting character than she might have been, to the detriment of the book. 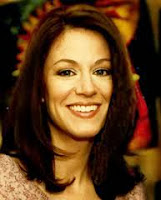 Thanks to the ladies of TLC Book Tours for including me on this tour. For other opinions on about Mrs. Lincoln's Dressmaker, see the full tour.

Jennifer Chiaverini is the author of the New York Times bestselling Elm Creek Quilts series, as well as five collections of quilt projects inspired by the novels. A graduate of the University of Notre Dame and the University of Chicago, she lives with her husband and sons in Madison, Wisconsin.

Ms. Chiaverini is well known for her Elm Creek novels about quilts. Ms. Keckley did make a quilt out of the remnants from the dresses she made for Mrs. Lincoln and Ms. Chiaverini has included the details of this quilt in the novel It's one of the details of the book that was all the more interesting for being true.