Landline by Rainbow Rowell
Published July 2014 by St. Martin's Press
Source: I bought this one at my local indie bookstore when I went to hear Ms. Rowell speak

Publisher's Summary:
Georgie McCool knows her marriage is in trouble. That it’s been in trouble for a long time. She still loves her husband, Neal, and Neal still loves her, deeply—but that almost seems beside the point now.

Maybe that was always beside the point.

Two days before they’re supposed to visit Neal’s family in Omaha for Christmas, Georgie tells Neal that she can’t go. She’s a TV writer, and something’s come up on her show; she has to stay in Los Angeles. She knows that Neal will be upset with her—Neal is always a little upset with Georgie—but she doesn’t expect to him to pack up the kids and go without her.

When her husband and the kids leave for the airport, Georgie wonders if she’s finally done it. If she’s ruined everything.

That night, Georgie discovers a way to communicate with Neal in the past. It’s not time travel, not exactly, but she feels like she’s been given an opportunity to fix her marriage before it starts. . . .

Is that what she’s supposed to do?

My Thoughts:
You know who some book summaries are dense and loaded with details, just like some books? The publisher's summary for Landline should also give you a good idea of what you might expect in the book in terms of both story and style. Clutter free, a quick and easy read.

Let's just address the elephant in the room right off the bat, shall we? Spoiler alert - there's a magical phone in this book. Yep, that's the way Georgie finds to communicate with Neal in the past. And it's a problem for a lot of readers. Then there's this girl, who generally shies away from magic or fantasy in books. For some reason, I had no problem with that magical phone line at all. I couldn't figure out why but then I read a review, by Janet Maslin of the New York Times, who compared the magic in this book to the magic of an angel who gave George Bailey a look at what life might have been without him in the movie It's A Wonderful Life. I love that movie and I have no problem with that plot device to allow a character to develop, to rethink life. Likewise, as a plot device, I was okay with a magical phone to allow Georgie to rethink her life and her marriage.


"It wasn't dancing. It was just a way to make the wedding last. A way to stay in the moment, rolling it over and over in their heads. We're married now. We're married.

You don't know at twenty-three.

You don't know what it really means to crawl into someone else's life and stay there. You can't see all the ways you're going to get tangled, how you're going to bond skin to skin. How the idea of separating will feel in five years, in the - in fifteen. When Georgie thought about divorce now, she imagined lying side by side with Neal on two operating tables while a team of doctors tried to unthread their vascular systems.

She didn't know at twenty-three." 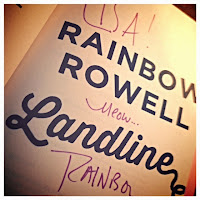 "Maybe Georgie had gotten a glimpse of it then, the way infinity unspooled from where they were swaying. The way everything she was ever join got be from then on was irrevocably tethered to that day, that decision."

I got married two days after I turned twenty-two. I didn't know at twenty-two. But like Neal and Georgie, no matter what problems there might have been in our relationship then, we couldn't imagine life without each other.

In most relationships, it's give and take. Even to Georgie, though, it seemed like Neal was the one doing most of the giving. She knew that; she just didn't know how not to make that happen. So when she was given the chance to talk to Neal in the past, she knew she had the chance to keep him away from her, to give him a life where he might get to do more of the taking. I loved "watching" her wage this battle in her head, loved "watching" her fall in love with Neal all over again, loved "watching" her think about what matters in her life and what she would be willing to give up to make someone she loves happy. Mostly, though, I loved, as I always do with Rowell's books, the dialogue between the characters. It's such a vital part of all of her books and she is so very, very good at it.