Hearts West: True Stories of Mail-Order Brides on the Frontier by Chris Enns
Published February 2005 by TwoDot
Source: this is my mom's copy

Publisher's Summary:
Complete with actual advertisements from both women seeking husbands and males seeking brides, New York Times bestselling book Hearts West includes twelve stories of courageous mail order brides and their exploits. Some were fortunate enough to marry good men and live happily ever after; still others found themselves in desperate situations that robbed them of their youth and sometimes their lives.

Desperate to strike it rich during the Gold Rush, men sacrificed many creature comforts. Only after they arrived did some of them realize how much they missed female companionship.

One way for men living on the frontier to meet women was through subscriptions to heart-and-hand clubs. The men received newspapers with information, and sometimes photographs, about women, with whom they corresponded. Eventually, a man might convince a woman to join him in the West, and in matrimony. Social status, political connections, money, companionship, or security were often considered more than love in these arrangements.


My Thoughts:
My mom read and reviewed this one for me in 2009. At the time I wrote "I know this one will be coming home with me..." Five years later, I finally got around to reading it as part of the Dewey's Readathon. It was a perfect choice for that - short to begin with and something I could read a chapter or two of then split off and read something different for a while. 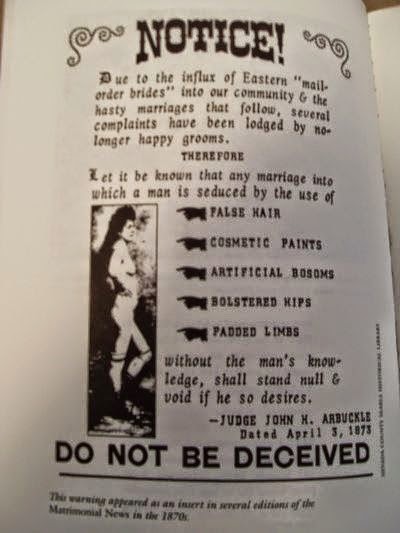 I won't get into too much detail because it's already been reviewed on this blog but I wanted to point out a couple of things I found interesting about the stories in this book as they relate to present day relationships.

First there was this notice, warning men of the seductive powers of women and advising them that any marriage entered into based on misrepresentation by the woman would be null and void if the man so desired. Goodness, gracious! If men were warned off of any woman who has false hair (extensions, coloring), cosmetics paints, and artificial bosoms (padded bras, implants), were would most of the women of today be?!


About clubs and the newspapers in the summary - there were entire newspapers then (as there still are today) where men and women alike put notices hoping to find a mate. Think modern day eharmony or, heaven help us, Tinder. Isn't it interesting to think that 150 years later, people still have

trouble finding a mate? Although most of eharmony's clients probably aren't looking at making a 3000 mile journey around the cape of South America, so desperate are they to escape their current circumstances.

And they were desperate back in the late 19th-century. In the west there were almost no women and in the east women were eager for a chance to escape poverty or widowhood. There were plenty of stories in the book about couples who, after all of the travel, were so disappointed with the reality of their chosen partners that they didn't even get married or whose marriages didn't last. But, according to the book, the National Archive Department in Washington believes that mail-order brides produced a high percentage of permanent marriages. Enns says the reason cited is that "the advertisements were candid and direct in their explanations of exactly what was wanted and expected from a prospective spouse."


"I am fat, fair, and 48, 5 feet high. Am a No. 1 lady, well fixed with no encumbrance: am in business in city, but want a partner who lives in the West. Want an energetic man that has some means, not under 40 years of age and weight not less than 180. Of good habits. A Christian gentlemen preferred."

Well, there you go - can't get much more direct than that! Maybe those folks seeking a mate today should heed that advice!
Posted by Lisa at 1:30 AM

Wintering: The Power of Rest and Retreat in Difficult Times by Katherine May