Calling Me Home by Julie Kibler 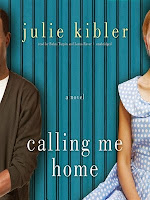 Publisher's Summary:
Eighty-nine-year-old Isabelle McAllister has a favor to ask her hairdresser Dorrie Curtis. It's a big one. Isabelle wants Dorrie, a black single mom in her thirties, to drop everything to drive Isabelle from her home in Arlington, Texas, to a funeral in Cincinnati. With no clear explanation why. Tomorrow.

Curious whether she can unlock the secrets of Isabelle's guarded past, she agrees, not knowing it will be a journey that changes both their lives.

Over the years, Dorrie and Isabelle have developed more than just a business relationship. They are friends. But Dorrie, fretting over the new man in her life and her teenage son's irresponsible choices, still wonders why Isabelle chose her.

Isabelle confesses that, as a willful teen in 1930s Kentucky, she fell deeply in love with Robert Prewitt, a would-be doctor and the black son of her family's housekeeper--in a town where blacks weren't allowed after dark. The tale of their forbidden relationship and its tragic consequences makes it clear Dorrie and Isabelle are headed for a gathering of the utmost importance and that the history of Isabelle's first and greatest love just might help Dorrie find her own way.

My Thoughts:
Based on the recommendations of many fellow bloggers, the Omaha Bookworms read Calling Me Home as our May selection. It made a great book club choice with readers both loving and not-so-much-feeling-the-love. I feel somewhere in between.

As is so often the case in a dual narrative, one story worked much better for me. Isabelle's story pulled me in from the start - I loved her spunk and her determination (even though, as a young girl, it led to so much trouble). Dorrie's story didn't work as well for me. I didn't feel like she was as solid, as though Kibler could not decide if she wanted Dorrie to be strong or not.

I understand Kibler's choice to try to explore issues from the a past and a present point of view, hence the choice to use Dorrie as a foil to Isabelle's story. Even had the stories felt more balanced, though, I would have still had issues with Dorrie's story. I'm certain I've expressed before how tired I'm getting of dual narratives with stories in both the past and present. So that's a strike any book would have to overcome from the beginning. Then there's the fact that I would much rather have been reading Robert's side of the story, or even his sister Nell's, rather than what Isabelle, looking back in time, felt had been his side of the story.

Most reviewers on Goodreads have given Calling Me Home five stars. They have almost unanimously cited a deep emotional attachment to the book. I didn't feel that, at least not throughout the book. I think moving back and forth between the two women's stories pulled me out of the emotional connection I had with Isabelle's life...the tension, the sadness, the pain. Because it was there. It's the reason so many people love this book, why so many people cried.
Posted by Lisa at 1:30 AM
Email ThisBlogThis!Share to TwitterShare to FacebookShare to Pinterest