Fairy Tale Fridays - "Into The Woods" 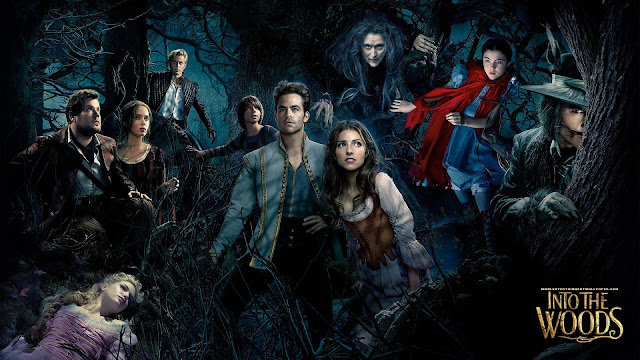 I finally saw Disney's Into The Woods last weekend! Based on the Broadway musical with lyrics by Stephen Sondheim, it blends the tales of Jack and the Beanstalk, Rapunzel, Cinderella, Red Riding Hood, and the Baker and his Wife from The Gingerbread Boy. You've gotta admire Sondheim and writer James Lapin for putting together all of these stories and making it work, including the very memorable songbook (seriously, those songs are still playing in my head almost a week later - someone please make it stop!). It's iconic at this point, so kudos to Disney for even attempting an adaptation.

I'm only recently familiar with the music from Into The Woods (shocking, I know), and I'd never seen the play performed (although I have since watched the original Broadway production on YouTube with Bernadette Peters). So my feelings about the movie are bound to differ from those of die-hard fans. I know there are songs that were cut (which is a real problem for some fans) and there is no designated narrator.

Clearly this adaptation has been softened, "Disneyfied," as it were. Still, Cinderella's stepsisters cut off bits of their feet to try to fit into the slipper, the Baker's Wife still commits adultery (although it's more implied than obvious), and a lot of people die. So, still very dark and maybe not something you'll want to watch with small children.

The movie lacks much of the humor of the play (without an audience to play to) even when it stays true to the play, taking itself much more seriously. Except for when it doesn't:

The cast is loaded with big names and they mostly do not disappoint (although I was happy that we don't have to see much of Johnny Depp - can't say that I'm a fan of his singing abilities). I was especially impressed with the two young actors' voices and James Corden, who I really only know as Craig Ferguson's replacement on the Late, Late Show.

The songs are marvelous - witty and multilayered with repeating musical themes that help tie the entire story together. It's a musical loaded with themes and lessons, depth you don't always see in the genre. Sondheim himself says it is largely about parents and children, and, in the end, viewers are left with the idea that family is what you make of it. Also, the lessons that actions have consequences and that sometime what you think will make you happy won't necessarily end with happily-ever-after. It's best to stay true to yourself and make your own happiness.
Posted by Lisa at 1:30 AM
Email ThisBlogThis!Share to TwitterShare to FacebookShare to Pinterest