Pin It and Do It 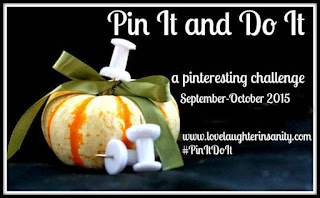 Y'all know how much I love when Trish (Love, Laughter, and A Touch of Insanity) hosts the Pin It and Do It challenge! She hasn't done it for quite a while (it being a lot of work for a working mom with two littles) so I was excited to see that she had decided to bring it back again this fall and it prompted me to open up my boards to see what I could get to this fall.

Books To Read: I will have knocked off several books from my Books To Read board before the end of this month, including Jojo Moyes' After You, Geraldine Brooks' The Secret Chord, Stewart O'Nan's Last Night At The Lobster,  and Margaret Atwood's The Heart Goes Last. It would probably be unfair to say that the challenge prompted me to read any of these since I was already planning on reading them this fall. Still...they were all pinned! 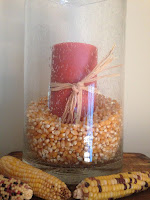 Fall/Holidays: A simple thing - I just filled a vase with a candle and yellow popping corn and tied my candle with some raffia. I actually had this pinned in several variations. I guess I must have liked the idea! 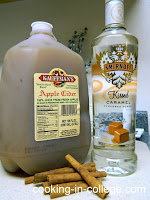 Drinks: It being fall, it was time to buy some apple cider. Since I already have caramel vodka, we made some hot cider with caramel vodka one night. I also used the caramel vodka in lieu of caramel sauce to make to make both salted caramel hot cocoa the night I watched the lunar eclipse and caramel apple sangria, both of which I had also pinned.


All in all, a successful Pin It and Do It challenge, I'd say! Thanks, Trish, for pushing us, again, to not just think about what we'd like to do but to actually do it.
Posted by Lisa at 1:30 AM
Email ThisBlogThis!Share to TwitterShare to FacebookShare to Pinterest
Labels: pinterest