Tiger Heart: My Unexpected Adventures To Make A Difference In Darjeeling, and What I Learned About Fate, Fortitude, and Finding Family...Half A World Away by Katrell Christie and Shannon McCaffrey
Published October 2015 by HCI
Source: my copy courtesy of the publisher and TLC Book Tours in exchange for an honest review

Publisher's Summary:
Katrell Christie never intended to visit India. In fact, her ideal vacation was a tropical beach where she could relax with a margarita in her hand. But when this former art student turned roller-derby rebel met three teenage girls at a crowded Buddhist orphanage in Darjeeling, she knew she had to help. What started as a trip made on a whim would prove to be a life-altering experience that would change the fate of these lost girls.

Katrell tells her remarkable story – from her quirky Atlanta tea shop to her fight for her young scholars halfway around the globe. Two scholars in the program are set to graduate from college and move on to pursue advanced degrees.

Most of the girls Katrell met in India faced grim futures as laborers or domestic servants. Some might have been relegated to lives of sexual exploitation. For them, she founded The Learning Tea, which has offered scholarships to 15 young women in Darjeeling, providing them with tuition, housing, clothing and medical care.

Katrell has us sipping tea with her at roadside tea huts, tasting hot samosas, dodging feral monkeys, and roaming the chaotic streets of Mumbai. The smells of small villages waft from the pages as we accompany her on her riveting and sometimes hilarious adventures across the globe in her mission to empower the young women who have become a part of her family.

My Thoughts:
By now you know what a sucker I am for books about India...and so do that ladies at TLC Book Tours! Of course, they knew it was a given that I would give this one a shot.


"People always ask me to describe India. Picture a large group of men dressed in orange dancing through the streets behind a blaring speaker in the back of a dump truck. A wild mother pig and her piglets come trotting down a busy street-with a monkey riding on her back. You drive through the desert and stumble upon a man sitting alone on a box with a sign that says "fax" and there sits a typewriter, connected to nothing.

India is gorgeous and tragic and humbling all blended into one, and I can't get enough of its surprises. I have sat on my bed in India at different times on different trips and rationed out my Q-tips. I'm exhausted by the idea that I might have to haul ass over a herd of goats; nine naked, sleeping babies; six piles of cow poo; forty dogs; a basket of live chickens; and hashed-out snake-charming soothsayers so that I can jump a moving train that either came a day late or left three minutes early."

Co-author McCaffrey talks about Katrell's conditions before writing the book: she wanted to show her mistakes, she wanted to protect the young women in her project, and she wanted to make sure she didn't exaggerate her role in any way. This is partly because that's the kind of person Christie appears to be. But I'm sure some of it has to do with Greg Mortensen who wrote (Three Cups of Tea) about and won wide acclaim for his project to build schools for girl in Afghanistan only to be later discredited.

Mortensen made much about the danger he faced in his project. Christie tends to downplay the danger (although there has been danger - she faced the wrong end of a gun or a knife more than once), instead focusing on the difficulties of trying to change the lives of just a few low-caste girls in a country that won't allow women to sign for property, where nails and hammers are not sold in the same stores, and where the con is a game she had to learn to play. 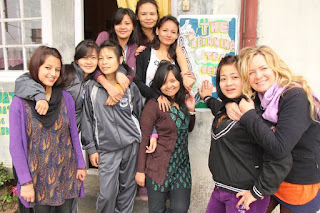 The book focuses not just on what was involved in trying to get the project off the ground but on what it has taken to sustain and grow it, each of the chapters in the book focusing on one aspect of that journey. From finding the right girls for the project, to fundraising and the pitfalls in doing that, to learning how to travel to and in India, to what it takes to keep things going on both ends, Christie is honest and open about what she has learned and experienced. She writes about what it took to wrap her head around even starting a project that she knew could help so few of those in need.


"I've always wondered about the South. How could people who thought of themselves as good, who went to church on Sundays and supposedly followed their Ten Commandments, how had they talked about or acted when they encountered slavery? I always imagined either someone horsewhipping a slave or the country grandma who builds a relationship with one of her servants.

It's the in between that I have never been able to imagine, until now. It means eating with people starving or dying outside the restaurant window. It's walking down the street with your kid while you're stepping over an old, crippled woman on her deathbed, shaking a can. It's the person who lives under the stairs and only comes out with a tray of tea when called upon. It's the four-year-olds who rush onto a train at the stops on their hands and knees to wipe down people's shoes for a penny.

And then it's the upper caste, who don't even seem to notice this is going on and can keep the cricket conversation going in a taxi with little kids banging on the window for food. It's like two completely different worlds, living in the same space, mere inches from each other. I had thought about this many times over my life, about the in between."

Once Christie made the decision that she was going to help as many girls as she could, without seeking help from major donors, she threw herself into it entirely. She once talked to a man from India who then lived in San Francisco and was surprised to find that he wasn't thrilled to be living in the Bay City. He told her "You have to decide whether you want a good life or a good lifestyle." Clearly Christie chose the later. Despite the difficulties, the danger, and the long hours, Christie has chosen the good life, both for herself and for a group of girls who would have had no kind of life without her.

To learn more about The Learning Tea, or to find out how you can make a difference, check out their website. Just a couple of days ago they hosted their biggest fundraising, an annual Indian dinner, held right in the tea shop at a cost of just $20 per person. I love that the cost to help is so little when you see so many fundraisers that price out the average Joe from being able to help. You can also make cash donations or purchase Darjeeling tea.

Katrell Christie is the founder and owner of The Learning Tea, a project which provides schooling and a safe haven for impoverished young women in India. Through her efforts with The Learning Tea, Ms. Christie has changed the lives of many women living in Darjeeling, India. Visit TheLearningTea.com for more information. Shannon McCaffrey is an award-winning reporter focusing on investigative stories for The Atlanta Journal-Constitution.She is an avid reader, a mother, and a runner.

Thanks to the ladies at TLC Book Tours for putting this book in my hands! For other opinions about the book, check out the full tour.

Posted by Lisa at 1:30 AM
Email ThisBlogThis!Share to TwitterShare to FacebookShare to Pinterest
Labels: book review, India, memoir, nonfiction