I've been a bit of a grouch lately, come holiday time. I hate that because there is so much that I love about the holidays. The beauty of the lights at a time of year when the landscape is otherwise so bleak. The music, on the radio, at home, and on the stage. The warmth of the lights and the greenery and the beautiful ornaments in my own home. The movies. The peace I find in the Christmas story. It does me good to stop and think about my favorite holiday festivities.

Music:
The city annually puts on a production of Handel's Messiah. My dad and I used to go the University of Nebraska's annual

production. He used to bring his score with us. We dressed up. When I became a parent, I understood that it was a tradition that may have started because he wanted to go but, with three young children, they couldn't afford to both go. By taking one of us, he had a companion and my mom had one less person around the house to watch over. Still, to this day I treasure that time we had and that piece of music.

Shows:
Nothing says Christmas more to me when it comes to movies than any of the versions of A Christmas Carol. In Omaha, the play is presented annually and for many years the character of Scrooge was played by the same man. We have been once but I love knowing that it is there for me if I ever want to see it again. 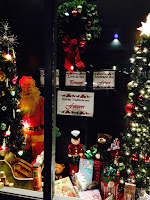 Outdoor Festivities:
We may not have mountains or oceans or even a river we make very good use of in Omaha, but we do a bang up job of decorating our city with lights for Christmas. We try to get out every year to visit the lights in the various parts of town. Last weekend we visited a part of town that has both a light display in the park and a store window competition for Christmas displays. Next weekend we will venture downtown to see the lights there. There we will also find Dickensian actors roving the streets, carolers, and instrumental groups. It is the kind of thing guaranteed to put a person in the mood for the holidays.

Reading:
When the kids were growing up, it was not uncommon for each of them to get a new Christmas book every year. Eventually we had to read two or three every night just to get through all of them before Christmas. I loved that but they have long since outgrown it. Still, I've kept quite a lot of the books and put them out every year. One day I hope to have grandchildren to read them to but in the meantime, I always make sure to read a couple of them to remind myself to find the joy in the season. 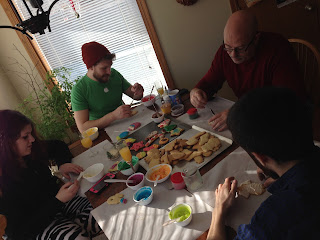 The Food:
Over the years, the way we celebrate has changed as people of moved, children have been born, and, sadly, both of The Big Guy's parents have passed. Along the way, though, some things have remained the same. At my parents', soups will be served for Christmas Eve supper with homemade ice cream for dessert. Their neighbor will gift us with Germna stollen bread to enjoy for breakfast and, if we're lucky, we'll find a reasonably priced Danish kringle to enjoy as well.

For me, the favorite foods of the season are the sweets. Not just because I love them (I do!). But because, since the kids were very young, making them has been something we have done together. I don't make as many different kinds of goodies as I used to but the things that remained are the things we do as a family - dip pretzels, make puppy chow, frost cookies. We get creative, we laugh, we make a mess. Mostly, we make memories.

The Reason For The Season:
My parents live a block and a half away from the church my siblings and I grew up attending, the church where my sister and I both got married. It's not a fancy place, but it is a kind of home. And the best place of me to sit, with my side of the family, on Christmas Eve and think about why we are all together. In that church, they have the tradition of having the congregation light candles while singing "Silent Night." If we're lucky, the gentleman who sings it in the original German will be there. Then that church is beautiful and the wonder of the Lord truly does shine upon us.

What are some of your favorite holiday festivities?