BBAW - What Have You Read And Loved Because of A Fellow Blogger? 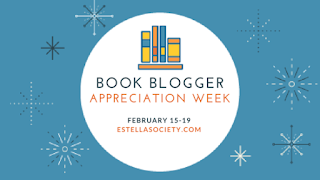 Well, this snuck up on me...again. Thanks to the ladies at Estella Society for hosting this year and bringing this community building event back to life. If you don't have a blog, you might think this event doesn't have much to offer you. But you'd be wrong. Because this is a great chance to get to learn about books and what people who love books (and read a lot of books) read and love.

Today our wonderful hosts have asked us to talk about the books we've read and loved because a fellow blogger introduced us to them. Oh. So. Many.

The Elegance of The Hedgehog by Murial Barbery. I'm not sure which blogger introduced me to this book; I'm inclined to think it was an accumulation of reviews that convinced me to pick it up. And then, for a good third + of the book, I was not very happy with those people. Then everything changed and I ended up deeply attached to the characters. It's one of the reason I find it so hard to give up on books now. You just never know if a book will turn for you.

In my twenties, I read a lot of Stephen King. And then I didn't. I didn't read any Stephen King at all. But a group of book bloggers have convinced me to take up the master again, most notably in 2013 when I joined them in reading King's Under The Dome, which weighs in at over 1000 pages. But it's King so it flies a long. King keeps the action moving along and the cast is large, but he also manages to draw the reader into their lives and care about them. And I defy you to see where this one is going. Seriously, if you tell me you figured it out before King laid it out, I'd be tempted to call you a liar. Extra fun when you get to talk about it with other people!

Ti, of Book Chatter, loves Haruki Murakami. Loves him. Writes about his books so eloquently that she had convinced me that I really needed to read one of his books sooner rather than later. And then she put together a readalong of The Windup Bird Chronicles and I was in. And I was hooked. I had no idea what the hell was going on a lot of the time but talking about it with other people and allowing myself to just make of it what I would turned out to be the perfect way to read this one and to fall in love with Muraki's style. I enjoyed it so much that when Ti talked about rereading Kafka On The Shore last year, I didn't hesitate to join her. 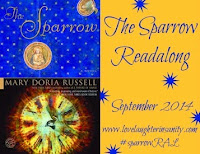 Maybe my favorite ever book that I was convinced to read by other bloggers was Mary Doria Russell's The Sparrow. I don't read much science fiction or fantasy and no space travel. The Sparrow is all of those things. But it's so much more. It's a book that a year and a half later is still making me think, still touching my heart. I keep very few books after I've read them. I know the chances of me rereading a book is small. This one, though, this is one that I'm certain I will reread again. Soon. I've read a lot of books I've loved in the past few years but very few that have impacted me in the way this book did. Andi of Estella's Revenge sold me on this book and Trish of Love, Laughter, and A Touch of Insanity put together the readalong that got me to read it. Thanks to both of them!

What books have you read and loved because of a blogger?
Posted by Lisa at 1:30 AM
Email ThisBlogThis!Share to TwitterShare to FacebookShare to Pinterest
Labels: BBAW