Golden Child by Claire Adam
Published January 2019 by SPJ* for Hogarth
Source: my copy courtesy of the publisher, through TLC Book Tours, in exchange for an honest review

Publisher's Summary:
Rural Trinidad: a brick house on stilts surrounded by bush; a family, quietly surviving, just trying to live a decent life. Clyde, the father, works long, exhausting shifts at the petroleum plant in southern Trinidad; Joy, his wife, looks after the home. Their two sons, thirteen years old, wake early every morning to travel to the capital, Port of Spain, for school. They are twins but nothing alike: Paul has always been considered odd, while Peter is widely believed to be a genius, destined for greatness.

When Paul goes walking in the bush one afternoon and doesn’t come home, Clyde is forced to go looking for him, this child who has caused him endless trouble already, and who he has never really understood. And as the hours turn to days, and Clyde begins to understand Paul’s fate, his world shatters—leaving him faced with a decision no parent should ever have to make.

My Thoughts:
"Hey, would you like to read this book set in a place you have an interest in and on Sarah Jessica Parker's imprint?" Why, yes, yes I would, thanks. Sometimes it doesn't take much to talk me into taking a chance on a book. This was a chance well worth taking.

If you have children, one of them has probably asked at one time or another "who's your favorite?" Of course, your answer is "I love you all the same," or something to that effect. The truth might not be so simple. There are bound to be days when you do favor one child over another. But what if you always felt that way? What if you really couldn't understand one of your children and one of them truly was the golden child? But you love them both, right?

Joy is willing to hold Peter back so that Paul will not be left alone. Clyde can see what Peter could be if he were allowed to learn at his own pace and how Peter might be able to pull himself up out of the poverty in which generations of his family have lived. They both mean well. But sometimes that's just not enough. And, sometimes, difficult choices have to be made.

There are a lot of characters in this book and not nearly enough time to delve deeply into each of them and yet I never felt like I was missing anything. Adam makes sure readers know everything they need to know about each character to understand the dynamics between them, to understand why they do what they will do. Much of that is due to the fact that she paints such a vivid picture of Trinidad, the landscape, the politics, the culture, the gap between the haves and the have-nots, the people. The island feels at once beautiful and dangerous.

Claire Adam's debut is one of those books that's going to make it difficult to pick up another book for a bit. It simply requires time to think about it, to feel it more deeply. 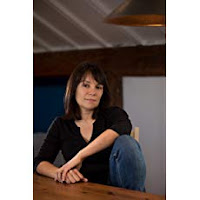 Thanks so much to the ladies at TLC Book Tours for including me on this tour. As always, for other opinions, check out the full tour.

Claire Adam was born and raised in Port of Spain, Trinidad and Tobago. She lives with her husband and two children in London, England. GOLDEN CHILD is her first novel.