Publisher's Summary:
It’s 1938 in San Francisco: a world’s fair is preparing to open on Treasure Island, a war is brewing overseas, and the city is alive with possibilities. Grace, Helen, and Ruby, three young women from very different backgrounds, meet by chance at the exclusive and glamorous Forbidden City nightclub. Grace Lee, an American-born Chinese girl, has fled the Midwest with nothing but heartache, talent, and a pair of dancing shoes. Helen Fong lives with her extended family in Chinatown, where her traditional parents insist that she guard her reputation like a piece of jade. The stunning Ruby Tom challenges the boundaries of convention at every turn with her defiant attitude and no-holds-barred ambition.

The girls become fast friends, relying on one another through unexpected challenges and shifting fortunes. When their dark secrets are exposed and the invisible thread of fate binds them even tighter, they find the strength and resilience to reach for their dreams. But after the Japanese attack Pearl Harbor, paranoia and suspicion threaten to destroy their lives, and a shocking act of betrayal changes everything.

My Thoughts:
Our theme this year for my book club is "The American Experience." I've tried to select books with varying historical perspectives, set throughout the country, and told from the view point of a variety of peoples. So when we had to make a shift in what we were reading and I needed a book that would be available through the library and also fit our theme, I figured something by See would be perfect. It both was and it wasn't.

China Dolls was perfect for our theme - we got to see the American experience of Chinese and Japanese immigrants in the 1940's, we got to see a view of our country during World War II that we don't usually see, we got to learn about other cultures and a part of history none of use were previously aware of, and we got to see places throughout the country. All that to say, this book opened our eyes up to a lot of new things.

Where it failed was, surprisingly, in the writing. I was not alone in feeling that while Helen, Grace, and Ruby might have become friends in the first place, their "friendship" didn't feel true beyond the early days. Even more, it was not believable to us that they would have continued to do things together when they so clearly no longer trusted each other. Relationships that are based solely on the fact that you don't feel like you have anyone else to rely on aren't friendships; these three had developed such a toxic relationship by the end, in fact, that it was a wonder they could be in the same room, let alone fighting over how they would stay together. 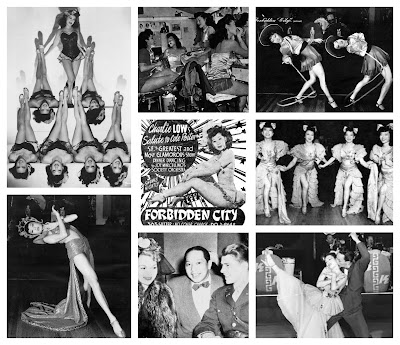 As with most historical fiction, you know I had to go see how much of this book was true. There were, in fact, Chinese nightclubs including The Forbidden City which catered to lo fan (Caucasians) and many of the people See references were real people. Other characters were fictionalized versions of real people.  Groups of the performers did perform in venues all over the country. Late in the book, the Helen's granddaughter asks Grace how she felt about perpetuating racial stereotypes. It's a interesting point to consider but, like so many pieces of history, something we always need to consider in the setting and time in which it occurred. These nightclubs gave the performers a venue to perform they would not otherwise have had; they gave people jobs when jobs were hard to come by. Was it ideal to perform as something of a curiosity? Of course not. But did it allow these people to live well and help support their families? Yes. And in that regard, I guess, they were able to live the American dream.
Posted by Lisa at 1:30 AM
Email ThisBlogThis!Share to TwitterShare to FacebookShare to Pinterest
Labels: Asia, book club, book review, diversity, historical fiction